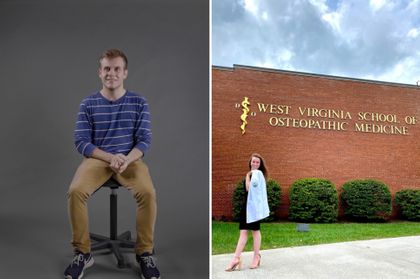 Gone is the stigma of enrolling at college as an undeclared student. For many, taking the time to find the right major makes all the difference.

Andrea Smiley ’20 remembers cringing when she’d have to answer two common questions high school seniors get from friends and family: Where are you going to college? What’s your major?

For the Spring Grove native, she knew York College of Pennsylvania was her school of choice. What would she study? That was a loaded question.

She’d rattle off a few different majors she thought could be appealing, but they were largely unrelated. She was interested in Psychology, Elementary Education, Theatre, and Biology, to name a few.

“It’s so tough when you’re 17 or 18 and you have to decide what you want to do for the rest of your life,” she says. “Enrolling as an Undeclared student was actually the best thing I did for myself. It gave me the freedom to take my time and choose what was right for me.”

Smiley remembers when she walked into a room of Undeclared students and Stephanie Perago, the Coordinator for Undeclared Student Advising, remembered her name. It helped her feel like she belonged.

While the plan was for Smiley to shadow a range of professionals, including a respiratory therapist and a nuclear medicine specialist, it wasn’t until she took Intro to Molecular Biology that something really clicked. The course was taught by Sean Georgi, Assistant Professor of Biology, and his passion for the subject lit a fire in her.

As her first semester started to wind down, Smiley realized she didn’t want to give up that class. So, she signed up for another Biology class with Georgi the following semester.

“I remember sitting in his classes and thinking, ‘Yes, this is what I want,’” she says. “The impact he had on me and his love for the subject had me hooked.”

Jacob Carlson ’22 also graduated from high school with a range of potential career paths on his mind. He chose York College because of its approach to helping Undeclared students. He remembers loading his first semester classes with topics that interested him—from Sport Management to Economics and Math.

It was in his Recreation Therapy class that he realized he might have found a career he’d never heard of before, but could be the perfect fit. Two more classes in the subject the following semester solidified it for him, and he declared his major.

“I had often volunteered in organizations that helped folks with a range of disabilities, and when I heard I could make that into a career, I knew it was something I wanted to pursue,” Carlson says.

Now a peer advisor, Carlson tries to help other students who are exploring their career options. He shares his story with those incoming students and believes it has helped him be a better learner, always open to investigating his options and choosing what’s best for him.

Smiley is now a second-year medical student at West Virginia School of Osteopathic Medicine. She hopes to be an OB-GYN.

“While York College certainly gave me a solid understanding of the sciences, it was the people I met there who really impacted me,” she says. “They encouraged me when I doubted myself. They helped me trust my gut. But you need people to encourage you and push you in life and make you feel like you can do this. That’s exactly what I found at York College.”