Matt Day is a two-time York College alum, earning his B.S. in Sport Management in 2002 and his M.Ed. in Educational Leadership in 2014. Day began his professional career at the College in 2006 as a Building Supervisor in the Grumbacher Sport and Fitness Center, Coordinator of Intramurals, and Assistant Baseball Coach. In 2007, he added all aspects of campus recreation to his job responsibilities. 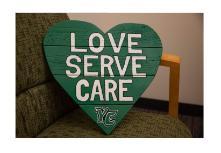 This was a handmade gift from friend and former colleague Kirstin Brown. "Love, Serve, Care" is Day’s leadership motto and comes from Jon Gordon's book, "The Carpenter." It's also special because it's green and white! 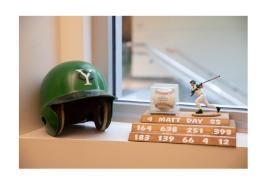 As seniors on the team, Day says they got to keep their helmets. His mom asked then-coach Paul Saikia for two of his old jerseys and had them framed as a Christmas gift. Baseball was a huge part of his experience at York, and Day says these pieces will always symbolize that time. 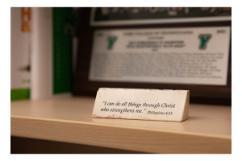 His faith has always been an important part of Day’s life, and this was given to him when he was in college. It's always been his favorite verse. He would write it on his hat and the tape on his wrists. He says it is also now his son's favorite verse and he, in turn, writes it on his eye black before each baseball game that he plays. 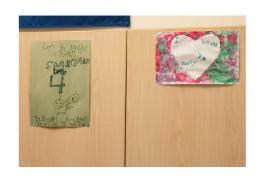 Day always has pieces of his kids' artwork displayed in his office. He says he has always wanted them to know how special he thinks it is when they make something for him, so he has many pieces proudly on display. 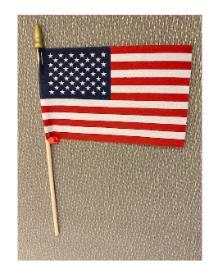 This is a new addition to Day’s office. His grandfather, who was 96, passed away in December. He was a World War II (two terms) and Korean War veteran. Day says as a symbol of his grandfather’s love and pride for his country, these flags were given out as everyone left the cemetery.

As the Associate Athletic Director, Day oversees NCAA compliance, assists with many day-to-day operations of the Athletics Department, and is the liaison to many offices across campus. He met his wife, Sara ’03, at York College where they were both student-athletes. They have an 11-year-old son, Luke, and an 8-year-old daughter, Alison