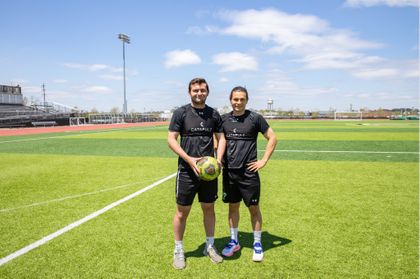 As the York College of Pennsylvania Men’s Soccer Team gears up for the 2022 fall season, a new strategy could boost its performance to the next level.

Head Coach Evan Scheffey ’09, a former starting defender on the team, is no stranger to leading the Spartans to victory. As a new approach to motivating his team, Scheffey started utilizing wearable technology during the 2021 season to measure the athletic performance of individual players.

The team dons GPS-enabled vests, infused with technology created by a company called Catapult, during training sessions and games. After a game or practice, the coaching staff uploads the data gathered to the Catapult software for analysis. Athletes can view their individual stats using Catapult’s mobile application.

Scheffey measures top speed, total distance covered, and the work ratio for each athlete. Using the measurements, he can keep an eye on players who are pushing themselves to their fullest and make strategic decisions based on their athletic profiles.

The statistics offer coaches insight about when to pressure players and when to throttle back. The technology has helped reduce the risk of preventable injuries, and athletic trainers use the data when recommending recovery time.

Knowing where each player stands physically, Scheffey can work with them on a personal level. Beyond providing statistics, the vests hold each player accountable and act as a motivational tool to help the athletes better themselves.

“We want to give our players the best opportunity to play at their maximum level,” Scheffey says. “Using our film analysis system and Catapult technology, we can motivate each player to push themselves to their highest individual potential. Ultimately, this will improve the overall performance and athleticism of our team.”

The athletes embrace the Catapult technology and the insight it provides after each game. They  have noticed that their individual fitness has drastically improved, and that has greatly increased their confidence when they step onto the field.

While the athletes cannot access their fellow players’ statistics, they compare the data as they think strategically about the next game and share in the camaraderie.

“The new wearable technology will help our team by enforcing the standard for players to give maximum effort each day,” says Brett Joyner ’22 (Pasadena, MD). “We want to build a culture of humility and selflessness to achieve our team’s goals.”

Brett, a team leader, welcomes the technology as a powerful tool for mental and physical improvement. As a Mathematics major, he might appreciate the measurable data more than the average athlete. He enjoys seeing himself and his teammates become better players.

Brett is grateful to his coach and the culture he has cultivated in the program. He says he will cherish the tight bond he has formed with his teammates.

Wearable technology has made a significant impact on collegiate sports in recent years. While it is new to the College, the athletes and coaches are excited about it helping them to maximize their potential in the 2022 season.