Ines Ramirez ’97 came to York College as an international student. Her passion is connecting YCP’s international students with not only life on campus, but with experiences of U.S. culture. She’s received many gifts over the years through her work with students from all over the world. She keeps them in her office as a reflection of students she’s influenced, as well as a reminder of how they’ve made a difference in her life. 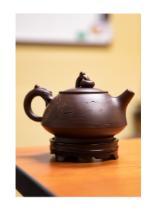 “This little teapot is very special,” says Ramirez. Made in the “Teapot Capital” of China, Yixing, it holds a very special message. “The Chinese characters on the teapot read: ‘For the sipping pleasure of refined lady Ines Ramirez––a good friend and mentor for students from all over the world.’ ” She received the gift from former Chinese Nursing student Zhiwen Zhou ’12. 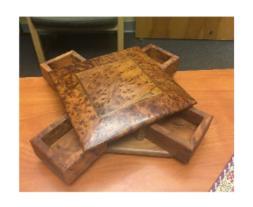 This trinket box was handcrafted in Morocco with thuya wood, indigenous of Southern Morocco in Northwest Africa. "It was a gift of current Moroccan student, Abdelhakim Benhallam '22," says Ramirez. "It has four compartments and it took me some time to figure out how to open it. The lid actually rotates clockwise to push out the four little compartments. These can be used for jewelry or other small treasures."

This gift was from former Mozambican student Cassio Cossa ’20 and is carved with African giraffes. “I keep this one on my shelf because it is pretty special,” says Ramirez. “This student chose to attend York College after meeting and speaking with two YCP alumni who were working for the U.S. government in Mozambique at the time. Their children attended the same school in Maputo as Cassio did.” She especially holds this item dear as it serves as a reminder of connections and “the power of ‘word of mouth,’ no matter where in the world you are.” 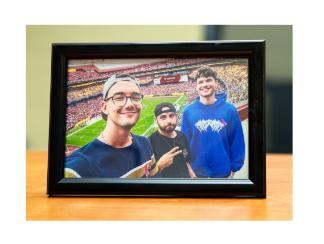 Taken at FedEx Field in Washington, D.C., at an NFL game, this photo shows three exchange students from Kufstein University in Austria posing with the field behind them. Felix Mayr, Tobias Hofinger, and Dominik Rainalter attended the College in the fall of 2021, and though they were only here for a short time, they made sure to experience as much of American culture as possible. They also visited New York City and Philadelphia. “They made many friends on campus and left YCP with a great study abroad experience under their belt,” says Ramirez. “This is the type of experience I want every international student to have. Experience not only on campus and in the York community, but to have the ability to enjoy all of the cool places and opportunities that the United States offers.”

Ines Ramirez came from Quito, Ecuador, as an international student at York College of Pennsylvania. She received her BA in Mass Communication with a minor in French and later received her MBA from the College. She began her professional career at York College in 1998 and has served in Academic Affairs, Enrollment Management, and Student Development and Campus Life. Most of Ramirez’s more than 20 years of experience at the College have been dedicated to admission, retention, and support of international and other minority students. Along with her current role, she serves as the primary designated school official for the Student Exchange and Visitor Program overseeing international students on F-1 student visas, and all matters of SEVP School certification. Ramirez met her husband of 15 years, Craig, at York College. They have a 10-year-old daughter, Briana, and a 15-year-old pug, Cooper.