From the first day on campus to donning their caps and gowns, the past few years have been an adventure for the Class of 2021.

Picture this, Class of 2021: It’s Move-In Weekend 2017. Friends and family gather to help decorate your dorm for your first semester of college. Heat courses through the halls of the Manors, or if you’re lucky, you had air conditioning in Northside Commons. Facing the unknown is scary; are you going to fit in? Make friends? Are you in the right major? And who is putting those bubbles in the fountain, anyway?

Looking back on the last four years, you’ve grown, explored who you are, and discovered a path in life. Wouldn’t it be nice if you could tell your first-year self to take a deep breath, and that everything is going to work out? Your college experience may have been challenging, and the rise of the COVID-19 pandemic certainly did not help — but Spartans, you powered through to the ultimate celebration. Your graduation day.

Let’s take a walk down Memory Lane, starting way back in August 2017.

During your first few days here, you were given a small green rock, a tribute to “Ol’ Spart,” the rock you get to sign during graduation (bonus points if you still have it!). This little rock, while small, had mighty significance. It was a blank slate, and only YOU got to decide what it would look like.

Fall 2017 was an interesting semester.

There were milestone moments.

You may have had a front row seat to the 21 Savage concert, or been “caked” by Steve Aoki. The 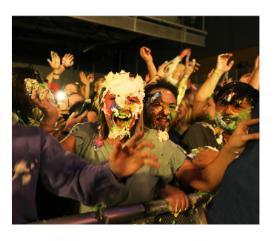 Music Department opened YCP Studios and the Graham School of Business launched programs like Cybersecurity Management and a Master of Accounting.

YCP’s women’s rugby team made it to Nationals. Eight players from the men’s lacrosse team were placed on All-Capital Athletic Conference squads and their coach, Brandon Childs, was named CAC Coach of the Year.

And then 2020 hit. You know what happened then. As a community, as individuals, as families, and as humans — we were tested.

That year, and everything that came with it, changed so much. It shifted your story. But keep in mind, it was not your whole story.

As you look back on your college years, yes, you will remember a pandemic, news stories that terrified our nation and our world, and a time of great uncertainty. It’s normal; those aren’t the kinds of things you forget.

Still, take some time now to commit the rest to memory, too.

The time spent with friends after class. The movie nights. The Fritter Fridays. The late-night trips to Rutter’s when it didn’t seem like there was anything better to do. Remember the times you cheered for something that made you proud. 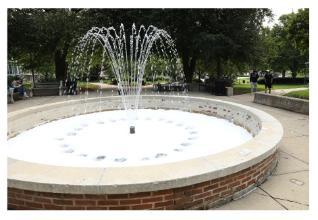 Remember the moments when you accomplished something meaningful, and others cheered for you. Those are memories worth holding, memories that make you who you are.

You have overcome a year of historic struggles, and the lessons you learned along the way will serve you for a lifetime...but that doesn’t mean you can’t also smile when you think of all those bubbles in the fountain.

Congratulations, Class of 2021, and cheers to memories that last a lifetime.