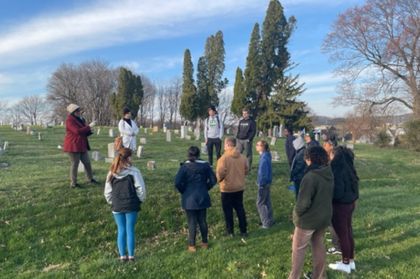 York College of Pennsylvania students have been researching and telling the stories of the area’s lesser-known Black historical figures buried at Lebanon Cemetery.

Sitting inconspicuously along the 1400 block of North George Street in York, Lebanon Cemetery is the final resting place for many Black residents of York throughout the last 150 years and still today.

A closer look reveals that many of the headstones are sinking into the ground, the stories of the names engraved on them sinking deeper into historical oblivion along with them.

The Friends of Lebanon Cemetery volunteers are trying to change that. Throughout the 2022 Spring Semester, York College of Pennsylvania students helped the group in its endeavor by researching and telling the stories of some of those buried there.

“In our Rhetorical Communication course for Engaged Scholars, we’ve partnered with Sam Dorm and the team at Lebanon Cemetery to continue the work of telling the stories of York’s ‘hidden figures,’ which the Center for Community Engagement has been doing for a few years,” says Dr. Dominic DelliCarpini, Dean of the Center for Community Engagement at the College. “Their project was to decide what untold stories were worth telling, and to find ways to tell those stories accurately and compellingly, keeping an eye to what makes the stories valuable for present audiences.”

For Paige Johnson ’25 (York) a Fine Art Major who researched artist and activist Lois Lambert Reeves, studying those buried at the Lebanon Cemetery helped them realize how little they had learned about York history, and even less about Black historical figures in York.

“Learning about Reeves, and other Black historical figures researched by my peers, and visiting Lebanon Valley Cemetery was a meaningful experience that made me feel pride and respect for our community,” they say. “It was significant to me to know that so many Black community members had had such a significant impact on their communities on a local, state, and national level.”

Arlette Morales ’25, a Criminal Justice major, chose to focus on the story of John Franklin Terry. Her research has led her to believe that he was one of the African Americans to represent the United States in the 1936 Olympics in Berlin.

Terry was a professional weightlifter who worked at York Barbell. After several unfortunate incidents in his life, he opened a center for youth in York that focused on helping Black children avoid going through what he had experienced.

Through researching Terry and visiting Lebanon Cemetery, Arlette felt the weight of the untold stories buried there.

“I’m from York City,” she says. “It was a shocker that I’ve been living here since I was 2 years old and never knew the significance this cemetery has for history.”

For Arlette, one of the hardest truths to come to grips with is that even in death, Blacks were subjected to segregation. Up until the 1960s, most cemeteries in the York metro area wouldn’t allow Black people to be interred. Arlette’s Mexican culture, in which the dead are venerated through Día de los Muertos, or Day of the Dead, has inspired her to continue telling the stories of those she’s researched.

“There’s a lot of work that needs to be done here,” she says.

Bringing together a community

Nate Linder ’25, an Accounting major, also grew up in York but had no idea that Lebanon Cemetery existed.

“I think there’s a real need to tell more of these stories and educate people in York,” Nate says. “I’ve lived in York my whole life, but despite that, the Black history of York is something I’ve never heard much about.”

He chose to research James Smallwood, who opened the first school for Black students in York in the late 1860s. Using such sites as Newspapers.com to sift through history, what struck Nate most was that, in spite of having very few resources or support, Smallwood was able to do so much.

Nate learned that the entire Black community, especially members of the African Methodist Episcopal Zion Church where Smallwood was a member, came together to start the school.

“Despite the fact that they didn’t have much, they worked with each other to come up with resources,” Nate says. “By working directly with a community on a grassroots level, even if you don’t have a lot of resources, you can create big changes and impact more people.”

After completing their research, students were tasked with proposing an apt way to create an appropriate remembrance, physical, virtual, electronic, or written—or in some cases, a combination, to commemorate each figure they studied and to help continue to tell their stories to a broader audience.

“Black kids in York should be seeing themselves represented in the history of their community,” Paige says. “It is meaningful to have that representation, to see that people that look like you have had an impact, big or small. When we share diverse histories, there is more opportunity for Black and brown kids and adults to find a point of connection.”

“In the end, the stories of the past define who we are in the present,” Dr. DelliCarpini says. “We hope the students will keep working on this, and that you’ll see some of their work—and some of these hidden figures—come to life around York.”