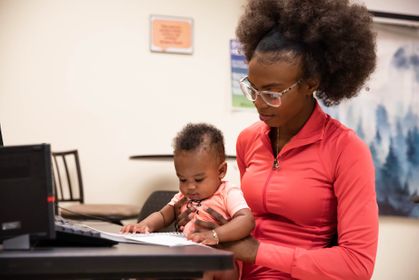 At first glance, York College of Pennsylvania may look like a typical campus in a typical college town—but look a little closer, and you’ll discover a community full of hidden (and not-so-hidden) gems. In our On the Ground series, we explore some of YCP’s most meaningful places and spaces, both on campus and in nearby York, with help from our own Spartan students.

Sherrell Robinson ’22 knows the value of the Writing Center.

The mom of two, originally from Philadelphia’s North Side, moved to York, Pennsylvania “because of the opportunities.” Sherrell, who is also in the Army Reserves, heard about York College from her best friend. “I wasn't really interested in pursuing an education at York. But she talked all about it and just told me to follow my dreams, so I did it to give my kids a better life,” she says.

Sherrell, who will graduate in December with a Bachelor’s degree in Criminal Justice and a minor in Applied Youth Development, cites the Writing Center as a major factor in her success. “I do everything there,” she says, laughing. “I think they think I live there as I even bring my baby in the stroller.”

Now on the Dean’s List, Sherrell finds the Writing Center an ideal place to work. “To me, I need noise to do work, and the Writing Center is like a mixture of quiet and noisy because of the multiple appointments; the library is too quiet for me, I'll never get work done,” she says.

Sherrell says the Writing Center has been a positive experience for her. She credits that experience partly to Dr. Kim Peck, who is the Director of the Center. “I actually wanted to drop out of college because my son’s father was killed in a car accident and I was struggling to even write one word on a piece of paper,” she says. Sherrell, who was pregnant with her second son at the time, says that Dr. Peck was “wonderful.” She adds, “When I had the baby, she took the baby from me and let me do homework,” she says, “and I got work done.”

Sherrell says the Writing Center has been accommodating for her needs.

She also likes that she can have a tutor in a different major look at her paper.

“A second major looking at it…they catch more mistakes than somebody in your major because they know what they're reading about,” she states.

Sherrell also appreciates the Writing Center’s pop-up visits. “Sometimes during the semester– they'll go at a different location on West Campus usually–and people can just pop up and work with the Writing Center. Those are such fun experiences. They come with snacks.”

She also likes that she can “double-dip” between the Writing Center and Academic Support Center, because they’re located next to one another.

“It’s like McDonald's,” she says, laughing. “The Writing Center and the Tutoring Center is like your favorite sauce, because you can double dip your chicken nugget.”