Stephanie Perago is thankful to be part of the Spartan community and relishes her role as mentor. As Coordinator of Undeclared Student Advising, she embraces the idea that being an Undeclared major is an advantage, not a drawback, when students make career plans. Items in her office clearly reflect that belief.

The sign reads, “Undeclared is an opportunity, not a disadvantage.” Bryce Kruger ’18, a former advisee, made that sign and gave it to Perago as a gift. It is a phrase that she often shares with prospective and current students, and she says it definitely resonated with Bryce while they explored majors during his first semesters at YCP. 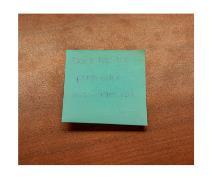 The note says, “Don’t let the pushback dissuade you.” These words were said to Perago by a dear mentor and friend when she first started her full-time role coordinating the Undeclared Student Advising program. 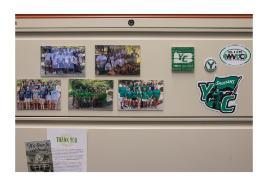 These hang on Perago’s door and on her filing cabinet. She says, “The PA staff is the absolute BEST part of the work that I get to do at YCP. These student leaders help during summer orientation, keep in touch with the current Undeclared students on campus, and work in the Academic Advising Center during the fall and spring semesters.” 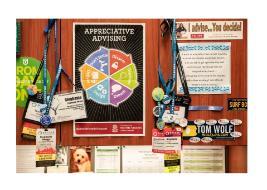 The tags are from the different Global Community for Academic Advising (NACADA) conferences that Perago has attended over the years. She says NACADA is a professional organization that focuses on networking and professional development in the world of advising. “I have presented at three different NACADA conferences, and will do so again this fall in Portland, OR.” 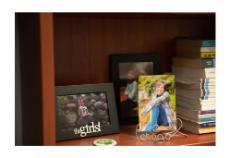 5. Pictures of my Daughters

“My daughters, Emily and Erin, are my world. Emily graduates high school this year, and this fall she will be attending Juniata College to study Biology. My younger daughter Erin will be a high school senior next year. She is one of the drum majors for the Dallastown Area High School Marching Band, participates in musicals, and dances on a competitive hip hop dance team with BDazzled Dance Studio in Red Lion.” 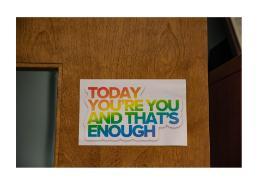 The sign reads “Today you’re you and that’s enough.” Perago says it is a quote from one of her favorite Broadway musicals, Dear Evan Hansen. “A few years ago, I went with my husband, Steve, and my two daughters to NYC to see it, which was an incredible experience.”

Stephanie Perago has been at the College since 2006, serving in various capacities. Her undergraduate and graduate degrees are in Spanish. Her first job was as a high school Spanish teacher. She left full-time teaching to raise her two daughters, Emily and Erin. Eventually, she found herself easing back into the world of work–first, at WellSpan Health as a Spanish interpreter, and second at York College as an adjunct Instructor of Spanish. Over time, her roles have varied. She has taught various Spanish courses, advised, served as a Back on Track mentor, and more. In 2014, she was hired full-time to centralize and lead the Undeclared Student Advising program, as well as supervise the Peer Advisor staff.