Dr. Mike Zerbe works in the Communication and Writing Department and has been at York College for 21 years. He teaches general education writing courses, upper-level writing and rhetorical theory courses in the Professional Writing major, and science fiction. His office is in the Humanities Center, and he jokes that he spends too much time and money at the Starbucks just down the hall.

Dr. Zerbe teaches mostly rhetoric courses. Rhetoric is the study of language as function or purpose: in other words, the use of language to achieve goals. He is fond of saying that "99.9% of language use for most people is rhetorical–you're trying to get something accomplished!" The Rhetoric Badges, which were distributed annually for a number of years at a College Composition and Communication conference, celebrate the importance and power of language. 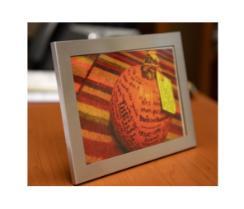 One fall semester, Dr. Zerbe was teaching Rhetorical Theory, which is a required course for Professional Writing majors. This course features an intense, challenging reading schedule of Plato, Aristotle, Cicero, and many other rhetoricians. At some point close to Halloween, the students decided that they needed some comic relief. Led by Jacky Liquori ’07, now YCP's Digital Copy wizard in Print Services, the students bought a pumpkin and covered it with quotations of outrageous things that Zerbe allegedly said in class.

Dr. Zerbe has always been an avid reader: he was one of those kids who always had his nose in a book. It probably comes as no surprise, then, that he likes having books in close proximity! And although he has a Kindle, he prefers books with covers and paper pages. Zerbe's bookshelves are at capacity 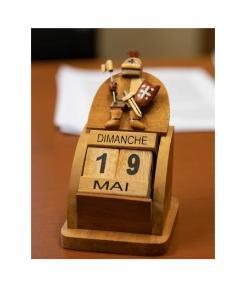 Dr. Zerbe likes to travel, both in the United States and internationally. In fact, he has been to 44 states and 31 countries, not counting airport stopovers. One of his favorite international destinations is France. This calendar comes from the famous medieval town of Carcassonne, recommended to Zerbe by Dr. Mary Boldt, in the southern part of the country. It's a tourist trinket, but somehow it still resonates. 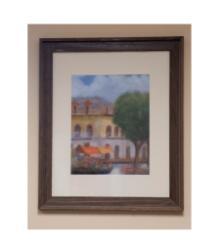 5. Painting of a Villa and Tree

Dr. Zerbe's wife Carmen Del Castillo-Zerbe is from Peru, so the family spends a lot of time in South America. Del Castillo-Zerbe teaches Spanish and does some painting. She painted this tranquil scene of a European-style villa fronted by a full, mature tree and flowers under a summer sky.

Dr. Mike Zerbe is a south-central Pennsylvania native, who grew up on a small horse farm near Ski Roundtop and earned a B.S. in Chemistry from James Madison University, a Master's degree in Technical and Scientific Communication from Miami University (Ohio), and a Ph.D. in English from Purdue University. He was awarded a Health Communications Fellowship at the National Cancer Institute in Bethesda, Maryland, and worked for several years as an editor for a cancer research journal. He has also taught abroad twice, once in Bulgaria and once in India, and served as the Assistant Director of James Madison University's Semester in London program.  Fun Fact: Zerbe is a twin.