Dr. Jeff Thompson believes building relationships with his students is one of the best parts of working at a smaller school like York College. He has collected and been given many items over the years. Some of these items are used as teaching tools, while others just decorate his office space. 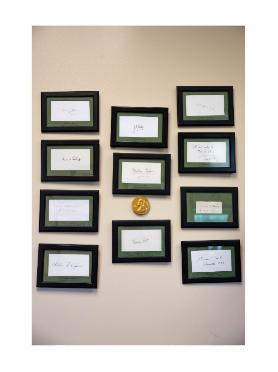 Dr. Thompson likes to incorporate the history of scientific discovery into the topics he teaches, emphasizing that great discoveries often come from people who work hard, have a continuous curiosity and a diligence not to give up, even if their ideas are outside the box of current understanding in their field. Thompson’s autograph collection covers a broad range of scientists who have made important contributions to biology and biochemistry, including Francis Crick (co-discoverer of the structure of DNA), Hans Krebs (discoverer of a crucial mechanism used to extract energy from the food we eat), Christian Anfinsen (discoverer of how protein molecules fold in three-dimensional space to gain activity), and even J. Michael Bishop (a York, Pennsylvania native who discovered how some viral genes can infect animal cells and cause cancer). 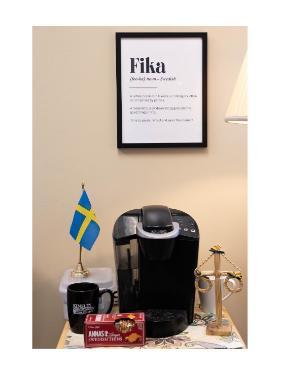 Dr. Thompson first encountered the idea of “Fika” (pronounced fee-ka) on a family trip to Sweden several years ago. He is of Swedish descent, and several of his American relatives traveled to Sweden to meet some distant Swedish relatives. Upon his arrival in Kalmar, Sweden, the family hosted his first “Fika,” a typical Swedish tradition where time is taken out of the day to pause and enjoy a hot drink and a sweet snack. It is such a common daily cultural routine that even large businesses in Sweden expect their employees to stop everything and spend dedicated time socializing over strong black coffee and a cookie or two. Along with traditional YCP office hours where students meet with faculty to discuss or get clarification on class work, Dr. Thompson also invites his students to an office Fika, where he provides coffee, something sweet, and a time to chit-chat about things other than coursework. Developing and strengthening interpersonal relationships is an expected part of Swedish culture; Dr. Thompson encourages the same with his students using this borrowed tradition. 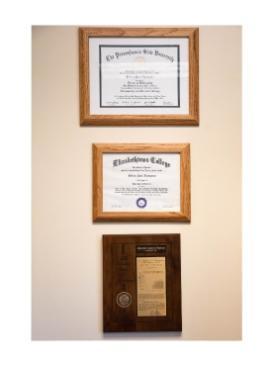 These documents help to remind Dr. Thompson where his path once took him, as he helps to prepare students for their own future paths. The items often spark student conversation during office visits as students inquire about graduate school and Dr. Thompson’s experiences as an undergraduate student, a graduate student, a post-doctorate fellow, and as a research scientist and co-inventor on several biomedical patents before coming to YCP.

4. Photos of family and friends, notes and cards from former and current students 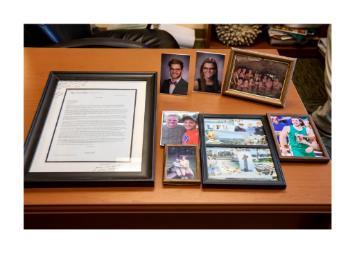 While similar items may be found decorating many office spaces, pictures of loved ones and handwritten notes from students help to ground Dr. Thompson and help him to remember what led him to this profession. Cherished items include pictures of family trips abroad and special moments in his life, simple birthday cards and thank-you notes from students, and pictures taken with students at scientific meetings. One very special item is a framed acceptance letter to Yale University graduate school from one of Dr. Thompson’s first research students, whose work with Thompson led him to an academic opportunity he never thought possible. He wanted to show his appreciation for his YCP experience by giving Dr. Thompson that letter rather than keeping it for himself.

Dr. Jeffrey P. Thompson graduated with a B.S. in Biochemistry from Elizabethtown College, and a Ph.D. in Biochemistry and Molecular Biology from The Pennsylvania State University at the Hershey Medical Center Campus. He worked as a postdoctoral fellow for three years in the Neurosurgery Department at the Hershey Medical Center, in the laboratory of Waldemar Debinski, principal investigator. Thompson and Debinski share several patents on inventions regarding the targeted delivery of chemotherapeutic agents into aggressive brain tumors. Dr. Thompson has been teaching in the Biology Department for over 20 years. During that time, his principal responsibility has been developing and teaching the Biochemistry courses offered at the College. He has mentored countless student research projects, producing work with students that has been presented at local, statewide, and national scientific meetings. Being an effective teacher, research scientist, and scholar is just as important to Dr. Thompson as connecting with his students both inside and outside of the classroom and research spaces.