Forty-two Years Ago, York College’s Spartan Circus ‘Had Everything But an Elephant’ Archivist Karen Rice-Young ’92 recently discovered the story of the Spartan Circus, an annual event that ran from 1977-1979.

In one photo, six dogs wearing ruffled collars perch on decorative boxes in front of a pair of llamas. Holding their reins is a man wearing what appears to be a bedazzled tuxedo. Just below that photo, another shot shows a scene where flames shoot out from a set of clubs juggled by a clown riding a unicycle.

While the pictures from a 1977 college newspaper story are black and white, somehow you can almost see the vibrant colors and feel the reams of polyester that brought the Spartan Circus to life.

For two days a year, from 1977 to 1979, York College of Pennsylvania students and even some professors traded in their chalkboards and books for big red noses, rainbow wigs, and absurdly large shoes to put on a show under the “Big Top” (aka Wolf Gymnasium).

Karen Rice-Young ’92 loves to dig. She’s the Schmidt Library Archives and Special Collections Manager, responsible for digitizing sources, making sure artifacts of York College history are preserved for future generations. People in her line of work love digging, wading through a sea of paper records for nuggets of information.

The Spartan Circus only ran for three years. It’s a tiny snippet of York College’s history, a blip on the radar.

But once Rice-Young found the first document about it, she needed to know more. “It’s just a really, really cool story,” she says.

It all started with Dr. Charles Boas, a geography professor at York College who also happened to run a traveling circus. It was called Circus Kirk, and over the summer the troupe, staffed by high school and college students, performed across Pennsylvania, Maryland, and Ohio. 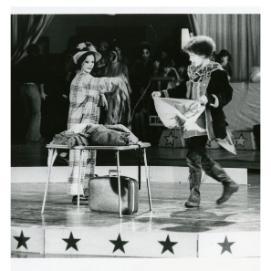 students was Don “Woody” Sherwood ’80. With school back in session, he wanted to raise money for the forensics club. The obvious answer to his money troubles? A circus, of course. With help from Dr. Boas, several other faculty members, and 70 students, the Spartan Circus was born.

Advertisements from the time tout trapeze artists, a tightrope-walker, clowns, jugglers, trampoline artists, animals, aerialists, and something with an alarming name for anyone with a fear of heights—high perch. “They had everything but an elephant,” Rice-Young says.

Some of the student performers had trained in Circus Kirk, but many of them were new to the ring. That’s the part that really gets Rice-Young. “Can you imagine anybody doing this now?” she says.

Although it featured students and staff, the show was open to the community. A 1977 photo from The York Dispatch shows three somewhat non-traditional clowns handing out flyers to kids in downtown York.

The show broke even the first year, but made enough to support the forensics club and theatre company the second and third.

‘This is our identity’

It’s not clear why the Spartan Circus didn’t make it to a fourth year. It’s possible that when Sherwood graduated there was no one to take over the reins. But its short existence isn’t what matters to Rice-Young. “Our college, like any college’s history, is unique to us,” she says. “It’s our identity.” 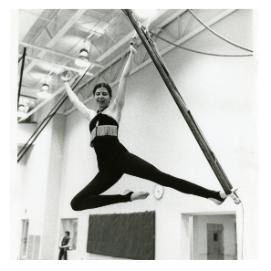 To her, the circus is further evidence of York College’s unique relationship with the York community. To read about what past students have accomplished and learn how deep the college’s roots go is exciting for a digger like Rice-Young. “This is our identity,” she says. “This is our fingerprint. This is who we are.”