Don’t be a fool—learn some YCP history this April Fool’s Day! In addition to being the traditional day for pranks and jokes, April 1, 2021 also marks the 275th birthday of the very first founder in York College of Pennsylvania’s history. The Reverend John Andrews, the original founder of the York County Academy opened a small classical school that, through a merger and many name changes, became the four-year institution we now know as York College.

The year was 1776 and colonial America was at war with Great Britain. The Reverend John Andrews, an episcopal clergyman, returned to York County where he had previously visited as a missionary that fall. When Andrews resigned from active service in the church, he decided to open a small classical school in the area. By 1787, the school’s program had grown. It became incorporated as a public school and was named the York County Academy (YCA). 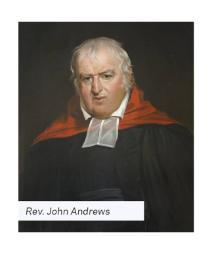 Years later, in 1873, YCA graduate Samuel Small opened another school, the York Collegiate Institute (YCI), along with his wife, Isabel Cassal Small. After twelve years of operation, the original YCI building burned down and the Smalls  rebuilt.

By the late 1920s, the world was changing fast. Both the YCA and YCI needed to adapt to meet growing demand. As a result, they entered into a reciprocal teaching agreement in 1929, and in 1941, the schools merged to become the York Collegiate Institute Junior College — later shortened to York Junior College (YJC) in 1944.

A few years later (1957), the Trustees of YJC bought 57.5 acres of land owned by the Outdoor Country Club. The campus moved to its present-day location on Country Club Road in 1962.

As the campus grew rapidly in the last half of the 20th century, so did the demand for post-secondary programming. The YJC President at the time, Dr. Ray A. Miller, led the College into its next phase as a four-year institution, and York Junior College became York College of Pennsylvania. 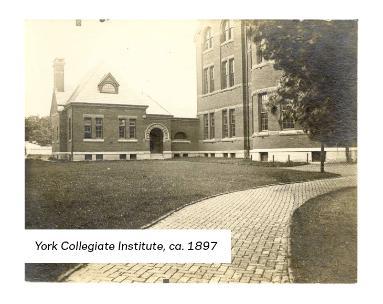 To mark the occasion, YCP President Robert V. Iosue instituted a Founders Day tradition, celebrating the founding fathers of both YCA and YCI each fall. For the first year, the York College Archives and Special Collections Room was opened to the public. They accept donations of college memorabilia still today.

The next year, on October 15, 1977, Founders Day was celebrated with the descendants of Rev. John Andrews in attendance and a bust of him was resurrected on campus in his memory.

In following years, the John Andrews Award and other recognitions of accomplishment were incorporated and given to alumni recipients. Tours were given of the Archives and campus as part of the celebrations, and a search also began to find more of Rev. John Andrews descendants and to establish future reunions for them.

The April Fools Joke that Keeps on Giving

YCP grammar fans have long debated the punctuation of “Founders,” “Founder’s,” or “Founders’ ” Day. When the tradition first began, physical documents and brochures of the time listed the event as “Founders Day.” The Archives have records of the event from the beginning in 1976 through 1981. In the 1980s, dedicated Founders/’s/s’ Day events faded in favor of other fall traditions, including Parents Weekend and Fall Fest.

In recent years, YCP has celebrated Founders Day during October, and in 2018, we celebrated our 50th anniversary of becoming a four-year institution with a week-long celebration throughout Fall Fest. And in 2016, the College switched things up a bit to coincide with the birthday of our first founder, Rev. John Andrews. The campus community celebrated a one-time “Founder’s Day” (notice the switch in apostrophe use!), coinciding with the launch of the College’s then-new website design.

In any case, whether it is “Founders,” “Founder’s,” or “Founders’, ” this day is a reminder of our York College history and the generations of students who have passed through our campus. Happy April Fool’s Day, happy 275th birthday to Rev. John Andrews, and happy Founders/’s/s’ Day to all of our Spartan family!

Contact archives@ycp.edu or 717.815.1439 for more information on the College’s history and for any donation inquiries.