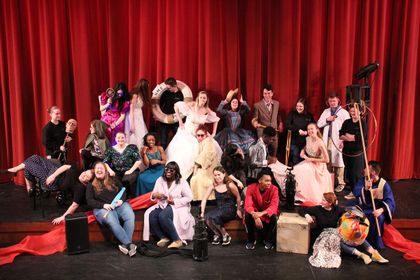 York College’s Theatre program’s fall production of Heaven on Earth was selected for participation at the Region 2 Kennedy Center American College Theatre Festival (KCACTF) in January 2021. The show will join seven other plays from around the region that were performed at colleges in person or virtually in 2020. Plays are selected after theatre professors and colleagues view the play and give feedback to the students involved on campus. Then at a selection meeting, notes of all productions’ feedback are read, discussed, and voted on before the regional leadership and executive committee make the final decisions on which shows will be invited to perform for the entire region. At the festival, national representatives from the Kennedy Center watch productions and, once again, give feedback to the student performers and technicians.

York College’s fall 2020 entry to the competition was created by students enrolled in a special topics class focused on virtual theatre taught by Assistant Professor of Theatre Suzanne Delle. The play’s link was available to the YCP community November 12-14, 2020. Using playwright Charles L. Mee’s script Heaven on Earth, students rehearsed and filmed short vignettes from the play and then uploaded them into an online world similar to a choose-your-own adventure video game. Led by junior Theatre major, Samantha O’Dea, tech students created this virtual performance world using the Spoke project on Mozilla Hubs as created by Brendan Bradley. This format allows the audience to enter the world at their own time via a link and explore the rooms, watch the videos, and have a unique experience in the ‘game.’ Mee’s work is suited to this nonlinear style of storytelling as he often creates his plays around a theme or artistic idea.

Mee is a professor at Columbia University School for the Arts, the playwright in residence for Anne Bogart’s theatre company, SITI in NYC, and was Signature Theatre’s Playwright in Residence for their 2007-2008 season. He is known for his autobiography about surviving polio as a teenager, A Nearly Normal Life, and for putting all his plays on his open-source website, the (re)making project, for artists to use in their own work. He states, “I like plays that are not too neat, too finished, too presentable. My plays are broken, jagged, filled with sharp edges...That feels good to me. It feels like my life. It feels like the world.”

Heaven on Earth allows the audience to experience mundane moments of life—a race car driver being interviewed, a farmer discussing a seed catalog, a housewife who discovers her husband has left her destitute—while also realizing our connectedness and humanity. Filmed across York College’s campus, the play asks us to find grace in the little moments of life and it feels especially poignant during the continuing coronavirus pandemic. Actors Theo Muhammad ’21, Becca Gibbs ’22 and Sam Robinson ’23 were singled out for their performances in the production and Samantha O’Dea ’22 was recognized for her work as the lead creator of the virtual world. KCACTF’s Region 2 will be presented online January 11-15, 2021.