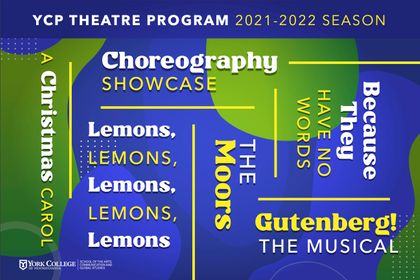 York College’s Theatre program received multiple awards and recognition at the regional conference of the Kennedy Center American College Theatre Festival. The conference was once again presented virtually, which allowed not just current students but also YCP alumni to participate.

The National Play Program, which supports student playwrights, utilizes student directors for the 10-minute play portion of the program. Melanie McGeary, senior theatre major from York, is currently directing on campus for her senior capstone. She worked with a student from Maryland’s Bowie State. Alums Tiffany Zellner ’19, who is currently the Wig Artisan at Trinity Rep in Rhode Island, and Lyle Sweppenheiser ’19, who is the Education Associate at People’s Light in Malvern, also directed new work.

Sophomore theatre major Acell Spencer of Catonsville, Md., was selected to participate in the Irene Ryan acting scholarship program for his work in the Spring 2021 live-stream production of Macbeth, where he portrayed both Malcolm and Banquo. This year was the first time since YCP Theatre started attending the conference that an acting student moved forward in the competition. Spencer was one of just 16 students to present in the final round. In addition to his monologue work, he performed a scene with sophomore mass communications major Clara Weber of Reading in the second and third rounds.

December graduate Samantha O’Dea ’21 received an Honorable Mention for her work as the lighting designer for the October 2021 production of The Moors. In addition, the Fall 2020 Special Topics class was commended by the national Kennedy Center College Theatre Artistic Director for Distinguished Achievement in “Adaptation of a Play to Digital Format,” “Multi-Media Adaptation and Innovation,” and “Special Achievement in Innovative Use of Technology” for their online interactive production of Heaven on Earth. Prof. Suzanne Delle was also singled out with a commendation for “Distinguished Achievement in Direction” for that show.

In addition, Delle was awarded the 2022 Innovative Teaching Award for Region 2, which includes multiple mid-Atlantic states including Pennsylvania. The award recognizes excellence and innovation in theatre pedagogy, and is a partnership between the Kennedy Center American College Theatre Festival (KCACTF) and the Association for Theatre in Higher Education (ATHE). Delle recorded an acceptance speech in which she discussed the adjustments that the pandemic forced upon her teaching and how her pedagogy has changed significantly while teaching in multiple modalities over the past two years.