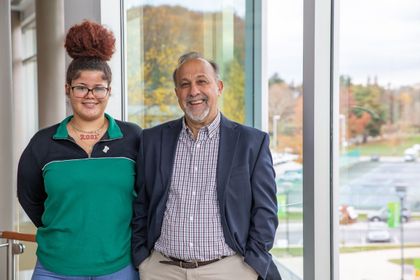 Paul Vigna has spent many years working in the newspaper industry. He is currently the breaking/trending night news editor for PennLive and The Patriot-News (Harrisburg), where he also covers mid-Atlantic wines and wineries.

Throughout his journalism career, he has made many connections. York College students in his Spartan Newspaper course are now benefiting from his relationship with Wallace McKelvey, who is currently the managing editor of content for The York Dispatch.

“Wallace and I worked together for years, and during that period I invited him several times to speak to classes I was teaching, both here and at Temple Harrisburg,” said Vigna. “He always seemed to enjoy it, as did the students.”

When McKelvey joined the staff at The York Dispatch, he reached out to Gabe Cutrufello, chair of the Department of Communications and Writing, to see how the paper and the College could partner.

“One of my goals is to hire local journalists to report on the communities where they live,” said McKelvey. “The best way I know how to do that is to connect with these potential recruits early and help them develop the skills they'll need to be watchdog reporters.”

The mentorship program has resulted in The York Dispatch publishing a series of student stories, allowing students to have a great experiential learning opportunity, and the paper to publish some good local content.

“Wallace came in and talked to the class about what he was attempting to do and why, and since then I’ve either been sending him stories that I think would be of interest to a broader audience or he’s been identifying them,” said Vigna. “That the student gets a chance to work with another editor to improve the story is beneficial, and certainly seeing it in print has been particularly gratifying, knowing that the audience size goes far beyond the current reach of The Spartan.”

“Coaching young journalists is the most rewarding part of my job — not simply editing their writing but working with them to uncover the truth about their world,” said McKelvey. “Personally, I measure success by the growth I see in reporters' work and in the impact their stories have on their community. By those measures, this program has been very successful so far. The students I've worked with have all been enthusiastic about the process, and I've seen them absorb the lessons I've imparted to them. On the other side, we've received a lot of positive feedback from readers about the stories we've published so far.”

Stories focused on topics including the first day the College lifted its mask mandate, and an interview with Prof. Tamara Schwartz on cybersecurity.

Alyson Hatfield ’24, a political science major and public relations minor, had her story about the experience of starting college during the pandemic published in print and on the newspaper’s website. She shared her feelings about the opportunity on a blog.

“This was an extremely exciting and rewarding experience,” she wrote. “As someone who has never thought of working in journalism, I first expected it would be a tedious process and that I wouldn’t gain anything valuable from it.

“It was during our last meeting when McKelvey informed me that my article would be printed in the newspaper. The news was not what I was expecting. At first, I thought writing the article was simply going to be an extension of my class, at most, it would be published on The York Dispatch website, so I am very excited to see my work get printed in a paper.”

Vigna’s course is a stacked course, “So students can take it twice more after taking it once with the idea of their being given more responsibility with each advancement,” he said. “I have 11 who are in 271 and two who are taking it for the second time, in 371.

In addition to participating in the mentorship program with The York Dispatch, these students have also revamped and updated The Spartan newspaper’s website.

“The new site looks great and is being run by our students as part of the Spartan Newspaper course,” said Cutrufello. “I am excited about the opportunities this course has presented to our students, and I congratulate them and Paul.”