A Profile in Courage and Determination 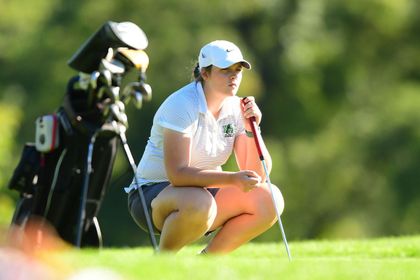 In honor of recent Spartan graduate Emma Harding completing her cancer treatment, here is a story about what she went through last spring before graduating from York College.

For York College women's golfer Emma Harding, her Hodgkin's Lymphoma diagnosis in January was shocking. Plans for a great spring of golf, a normal academic semester and future plans were all thrown into flux. There is no plan for a cancer pronouncement and certainly no plans when you are 22 with your whole life in front of you.

Fortunately for Harding, the golf program she helped lead from infancy was there to pick her up and take care of her. It provided her a network of support not often seen by people who have a cancer diagnosis.

In the fall of 2017, Harding, along with six other freshmen women's golfers arrived on campus for the first year of the Spartans' varsity women's golf team. It didn't take long for Harding to become a leader among the very young team. The nursing major's caring nature made her the mother hen early on in her tenure as a Spartan. That continued to grow as new Spartans joined the fold including 2022 seniors Jordan Koller, Anna Moore, Shelby Tapman, and Brenna Keener. It's a group, along with junior Natalie Robson, that has been through thick and thin. They have been together for a 2019 Capital Athletic Conference championship, for COVID stealing another chance for a championship in 2020, and a move to the Middle Atlantic Conference that yielded titles in 2021 and 2022.

"Obviously we have had success on the course," says head coach Eric Stauffer. "But this team is so much more than the results. It's truly a sisterhood that Emma has had a huge part in creating that culture. She is the heart and soul of our program. Without her, I highly doubt we would have had all the success we have. She means that much to all of us."

However, her statistics are almost irrelevant when it comes to her impact on the team says Koller.

"From the beginning, Emma's focus has been on the success of the team now and in the future," said Koller. "Being part of the original class, this team and the people on it are extremely special to her. Throughout my time here she has pushed and encouraged us to keep getting better for ourselves and to set a standard for the team. Where most young golf teams take years and many classes of golfers to develop, we saw success early on and Emma was at the heart of that. She is a great teammate and an even better friend. Whenever anyone wants to talk or hang out or needs anything, she is always the first to respond. Even as she faces her own challenges, she acts as a friend and teammate first."

The Spartans championship in 2021 was deeply meaningful to the team. They had their 2020 season wiped out because of the pandemic. They were playing in a new league for the first time and they were the favorite to win. However, things weren't going according to plan during day two of the tournament. York trailed Stevenson on the back nine during day two of the tournament. The Mustangs held a six-stroke lead but Harding was instrumental in securing the win. What she did on the back went a long way to helping her team capture the title. Harding shot a team-best 38 on the back as she had a bogey on 11 and then ripped off six straight pars as the Spartans were working to overcome the six stroke Stevenson lead. By time she sank her final putt on 18, the victory was sealed and York celebrated the team championship. She concluded her career as a three-time All-Conference finisher for the Spartans.

"Emma is the rock that holds us all together," says Tapman. "She keeps us motivated towards our goals and whenever anyone needs something we know that Emma will be there for us. She makes everyone feel welcomed, appreciated, and loved. These past four years getting to know Emma has been amazing, she has become one of my best friends. You will never meet anyone more charismatic and loving."

Not only has Harding been a standout on the golf course, she is also an outstanding student in nursing, one of York's most demanding majors. She owns a 3.46 GPA and has been a four-time member of the Spartan Dean's List.
Moore values Harding's friendship and heart during her time in York.

"Emma has been a role model for everyone from the beginning. When our class came in as freshmen, she took all of us under her wing and became "team mom" for both the men's and women's teams," says Moore. "She has also been one of my closest friends the last four years, she's one of the most genuine and giving people I have ever met. She has been there for me through so many ups and downs and is always so supportive no matter what. She is definitely the heart of this team, and she always has been."

Harding was recognized for her perseverance by the WGCA at the Division III National Championships as she received the Kim Moore Spirit Award. The award is dedicated to Kim Moore, who played collegiate golf for the University of Indianapolis from 1999 to 2003. Kim was an inspiration to all as she persevered through many physical challenges while playing collegiate golf. Her positive outlook and dedication toward the game was only outdone but her sense of humor and passion for the game.

The purpose of the award is to recognize and honor a student-athlete or coach who exemplifies a great spirit toward the game of golf, a positive attitude on and off the golf course, a role model for her team and mental toughness in facing challenges. The honor has been awarded every year since 2005.

"There could not have been a more appropriate winner of the Kim Moore Award," said Stauffer. "We are so proud of Emma. We are proud of her fight, her determination, and courage. She will be someone whose impact will be felt long after she has graduated."


Postscript
Harding graduated from York in May with a degree in nursing. She passed her nursing certification test in August. On September 2, she completed her cancer treatments and got to "ring the bell".

This story originally appeared on www.ycpspartans.com.