In addition to her experience as a classroom teacher, Dr. Kimberly Kode Sutton often talks about her time as the spouse of an active-duty USMC officer as the most formative of her life. Dr. Kode Sutton lived in a number of places across the United States and in Okinawa, Japan. Both her home and office reflect the family's time in Japan and their travel throughout Asia.

According to Dr. Kode Sutton, Kokeshi dolls are traditional Japanese folk art, originally made as an extra source of income for woodworkers in northern Japan. 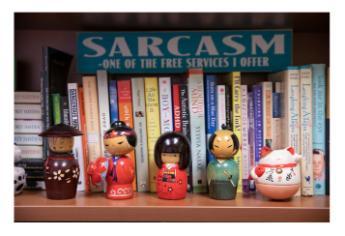 Some believe Kokeshi contain the spiritual essence of the dead and were originally made in honorary remembrance. “I have collected about 20 Kokeshi dolls, including some very old ones such as a Samurai, elderly husband and wife, fisherman, the four seasons, and one whose head spins to show faces with different moods.”

Dr. Kode Sutton has a tiny pair of Lion dogs in her office. Lion dogs can be seen guarding entrances and on rooftops in Okinawa and are believed to have been brought from China in the 15th century. She says they’re usually found in a male-fem 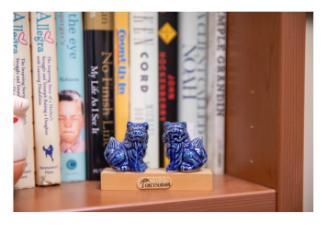 ale pair; the male with an open mouth scares away evil spirits while the female has a closed mouth to keep in good spirits. When she lived in Okinawa, Dr. Kode Sutton made her own pair from clay, about a foot high. Luckily, they survived the journey to the United States and now sit in her home office.

“I also have a small Hello Kitty, because of course!” Dr. Kode Sutton laughs. “You can’t talk about Japan without also referencing Hello Kitty (and Pokémon and anime, and…). Hello Kitty was everywhere for a period of time, and women had their entire cars decorated with it­–right down to the carpeted Hello Kitty-patterned dashboard. The one I have in my office is less cutesy than many, and it rocks back and forth to wave­–a subtle reference only.”

“I’m not one of those super-committed Disney fans,” Dr. Kode Sutton says, “but we took our kids a few 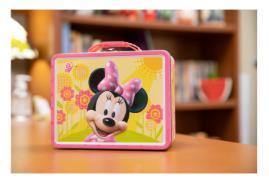 times when they were young. Because he’s a funny guy, my husband packed my lunch in a new Minnie Mouse lunch box and gave it to me on my first day on the job here at York College. The lunch box has been in my office ever since (although I did take the lunch out). A few years ago, I celebrated turning 50 by running the Disney marathon, so the lunch box now serves as a nice centerpiece with other Disney things from that run.”

Kimberly Kode Sutton is an Associate Professor and Chair of the Department of Education. Having previously been a practicing K-12 educator for over a decade, Dr. Kode Sutton now teaches courses on assistive technology, evidence-based instruction, and high-level practices as they relate to the field of special education and teacher education. She has presented her research at the Lilly International Conference on College and University Teaching, the National Association of Teacher Educators Conference, the International Conference on Improving University Teaching, and the Council for Exceptional Children Conference.