The venture results from a partnership with Saint Anselm College in New Hampshire.

Theo Muhammad ’21 played dozens of video games growing up, but few stuck with them the way That Dragon, Cancer did.

The game tells the story of a child’s four-year experience with brain cancer. It's told through the eyes of various individuals, including the child and his parents. The parents created the game to connect to others facing similar traumatic situations.

During their senior year at York College of Pennsylvania, Muhammad learned of a project with a similar goal. Students were asked to create a game to help first responders deal with trauma. They jumped at the opportunity.

"Our project is a chance to make a difference,” they say.

Helping others in need

They spoke of finding ways to combine Delle’s expertise in theatre and Brady’s studies in psychology. When Brady began working with a student who served as an emergency medical technician, the idea came to her to help first responders. 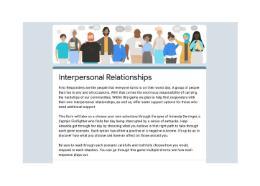 “We started this during COVID, when the day-to-day discussion was about the situation at hospitals,” Delle says. “For my students to feel like they were doing a little bit to help those workers, it was an important project.”

Saint Anselm students gathered data and created character traits based on interviews with first responders. York College students broke down how first responders might react in certain situations. They developed the basics of the turn-based game and considered how those playing it would react.

“We didn’t want to do it in a way that if someone with PTSD [post-traumatic stress disorder] was playing, we would throw them into panic attacks,” Muhammad says. “We wanted a game where we would intercut self-care sections to make sure the player would never be too in the moment.”

“We needed to understand all players of the game, not just first responders. We wanted family and friends to understand the emotional duress that their loved ones go through. There’s only so much that talking can do.”

Theo believes gaming provides a unique style of therapy that regular communication does not.

“With a game, you’re taking charge of a character moving through the world,” they say. “You are part of the story, making decisions and guiding the character. That’s a unique perspective that people don’t often get put into.”

Thinking outside the box

With the game still in development, Saint Anselm students are combing the information provided by their York College counterparts and exploring the game’s structure.

While it’s not complete, the project is gaining outside interest. Delle and Brady presented their findings at last year’s Social Healing Symposium at York College. They've spoken at other conferences across the nation as well.

The project showcases the range of opportunities for Theatre students beyond the stage, Delle says. 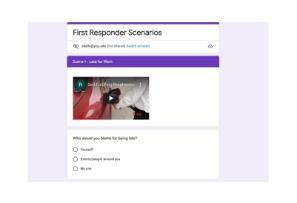 “We want to let other academics know about the ways to use Theatre students in their projects,” Delle says. “We’re hoping to inspire other professors to think outside of the box when they are creating research.”

Muhammad hopes to teach theatre to children, and they believe the game project will impact their career.

“You never know what niche skill is going to help you,” Muhammad says. “My niche skill from this program was being able to perform and imagine theatre in ways that theatre isn’t usually presented. It can be in a game, or in virtual reality, or on stage. This is something I never imagined doing.”

It was the range of York College’s Theatre program that brought Muhammad to the College in the first place.

“I came to York College because, as a member of the Theatre program, you have to run through every part of the theatre,” they say. “Dipping your finger in everything over four years helps you know what you like and prepares you for the world after school.”