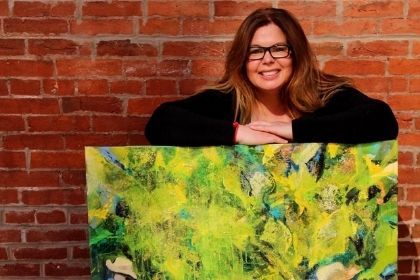 Jeannine Dabb ’20 wanted to complete the bachelor’s degree she never had a chance to finish. She did that and more, and she’s now the Appell Arts Fellow for York College of Pennsylvania.

Jeannine Dabb ’20 didn't think she was ready for college the first time she tried it more than 20 years ago. She enrolled at a college in Maryland to study Fine Arts, but dropped out just a year into her education.

“Fine Arts can be a lot more difficult than people realize,” she says. “There is an element of knowing yourself and knowing how to present yourself, knowing how to do art in a way that you’re able to express yourself more clearly, and I wasn’t really ready the first time around.”

She came home to York County and spent the next two decades working as a barber and a medical aesthetician, sometimes helping her dad at his business while running her own, Face to Face Aesthetics Center.

Nearly 15 years after Dabb left college, her mother became ill. Dabb stepped into a clay class at Creative York, hoping for some relief from the concern over her mother’s health, and it was like something woke up inside of her. When her dad retired, Dabb tried working in the corporate world, but only lasted about eight months. “I realized I’d rather be independent and work on my own,” she says. “I wanted to return to art.”

Dabb returned to college—this time at York College of Pennsylvania—three years ago to finish earning her bachelor’s degree as a Fine Art major. Her biggest concerns were about technology, and she admits she had a big learning curve when it came to using a computer, and even Google, to help her in the classroom.

“I had a lot of fears that I wouldn’t be successful at it,” she admits. “I’m grateful I came to York College because they could take the time to help me adjust and grow and learn the skills I was lacking.”

She began working at Marketview Arts soon after, where students in their junior and senior year can use studio space to create their art. She saw Appell Arts Fellows—Matthew Apol, Amber Wiesberg, and others—and started to think it was something she could strive to achieve after graduation. She applied and was later selected to be the 2021-22 Appell Arts Fellow.

Made possible through the generosity of Mr. Louis Appell Jr. and the Anne and Philip Glatfelter III Family Foundation, the Appell Fellow contributes to the growth and development of the Downtown York Arts District while refining their artistic abilities and building on other professional skills.

“I jumped at it because it felt like the right time for it, for me,” Dabb says. “I’m excited to get more involved with the community and the College and be part of something special.”

Just as York College provided opportunities for Dabb to learn no matter where she was starting in her journey, the Appell Arts Fellowship is making sure she’s ready for what’s next.

It’s where Dabb’s use of brilliant colors, dynamic lines, and abstraction to try to evoke positive feelings can make an impact on York.

“I want to keep in mind a sense of community while having this experience,” Dabb says. “I’m looking forward to working with other students, with leaders in our community, and creating some wonderful things together.”