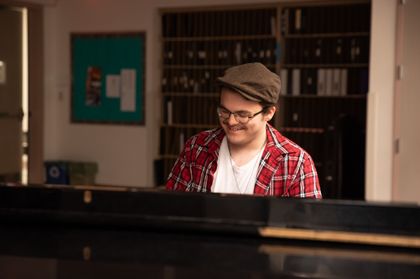 “Entering York College of Pennsylvania, I initially chose to be a Nursing major, because I wanted to help save lives, but now I plan on getting my degree in Music Industry and Recording Technology.”

Dillon Cortez ’25, a Brooklyn native, has had quite an impact at York College serving as a Resident Assistant (RA) and as a Student Senator. He decided on the College because of its successful Nursing program.

He had always wanted to go into the medical field, telling his family that since he was a young child. However, after two semesters of clinicals and a few Nursing courses, Dillon knew something was not clicking.

“I was in nursing for the wrong reasons. I was living vicariously and wanted to make my father’s dream of working in the medical field… a dream come true. Also, I chose a major that made me put future financial stability over the pursuit of my passions,” Dillon said

At first, Dillon ignored his doubts, but struggled with an identity crisis in doing so. “I spiraled into a really bad mental health [place] and realized I needed to do something about my situation,” he said.

When Dillon decided it was time to address his thoughts with others, he was met with acceptance and support.

Officially making the switch in the second semester of his third year, Dillon knew music was the right path for him; he had taken an interest in songwriting and was getting quite good at teaching himself how to play several different instruments. Now, Dillon is embracing his passion. He has improvised several songs and is self-taught on the piano, guitar, harmonica, and ocarina.

Crediting his parent’s support, faith, and the vast number of majors offered at YCP for easing his decision-making process, Dillon is now more optimistic about his future. He plans to open a production company focused on worship music in the future.

Dillon has this advice for those considering changing their major: “This is your life. If you want to switch majors, please don’t hesitate. It will take courage and is not easy. On the other hand, make sure this is truly what you want. Ponder…weigh the pros and cons. Ultimately though, this shouldn’t be a rushed decision.”