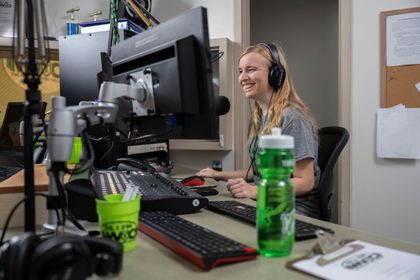 The Broadcast Education Association named the audio program the sixth-best in the nation and the overall communications program the 36th-best.

During an afternoon Zoom webinar in April, Instructor Jeffrey Schiffman let out a yell. His outburst was so startling that a student walked into his office to check on him.

That’s when the York College of Pennsylvania instructor shared the news. The Broadcast Education Association (BEA) had named York College the sixth-best institution in the nation for audio programs and the 36th-best for its overall communications program. The ranking puts the programs above those at institutions such as Temple University, Purdue University, and the University of Alabama.

“The BEA is the cream of the crop,” Schiffman says. “We’ve received numerous awards over the last five or six years, so I thought we would do well. But making the BEA’s inaugural rankings and being so high is an absolute honor.”

York College's ranking results from the number of students who received BEA awards in prior years.

“I was very surprised to learn that I won,” Heidel says. “I didn’t know my project was submitted until Schiffman told me I won.”

Heidel’s project arose from an Audio 3 class. Theatre majors in a script writing class conceived the Audio Dramas and acted out the plays, while Heidel and other students from Schiffman’s Audio 3 class served as audio engineers. They recorded the performances and added sound design, which includes sound effects, music, and ambience.

The production told the story of a character who is hit by a car and ends up in a medical waiting room before dying. She sees someone nearby who is in a coma, which helps her appreciate life and death.

“I needed to add sound effects like waiting-room music, footsteps, a car crash, and others,” Heidel says. “I wanted to make it as realistic as possible so that listeners could relate more to the story.”

What helped her project stand out was attention to detail.

“That’s key for audio,” Schiffman says. “She looked through the script and saw what needed to be done, but then added her own taste to it. She created a theatre of the mind. Mykela understands that, and it translates into her award-winning piece.”

York College has one of the top communications programs because of a focus on audio and video. Many colleges require only one audio class, and some tie it into a larger media class. That lack of emphasis on sound hampers a good visual product, Schiffman states.

“The most overlooked thing in making a film is sound,” he says. “If you watched a video and there’s no sound‒no footsteps, no dialogue‒what are you going to do? You’d get up and leave.”

At York College, students are required to take two audio classes. Schiffman works with video classes to instill audio as a foundation.

“If everyone is on the same page, the students are hearing it every step of the way,” he says. “If you can do that, students are thinking about it every single time they produce a project. The final result turns out even better.”

The skills acquired through York College’s communications program are evident in Heidel. She serves as visual arts director for Faith Like Birds, a faith-based organization that works with teens and young adults.

In her role, she designs promotional videos, graphics, and social media. She believes York College molded her to become a better broadcast professional.

“York College helped me come out of my shell,” Heidel says. “Being on camera is not my thing, but I learned a lot and I’ve grown as a person. Those skills helped me hold conversations better with other professionals.”

She credits the College with helping her discover a career path, despite having enrolled with no firm plan.

“Don’t feel like you have to make a rash decision to make other people happy,” she says. “Even if you go in undeclared, you’ll find something you’re passionate about and love. Coming out of high school isn’t the easiest thing to do, but York College made that journey easier.”