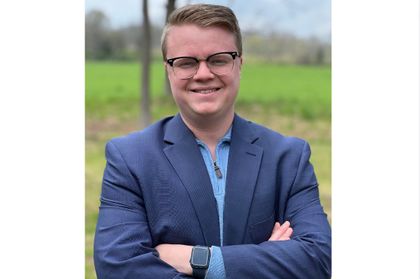 Alex Louderback ’21 received a $4,000 grant from the McNees Accelerator program at York College of Pennsylvania, which he’ll use to create his prototype device.

When Alex Louderback ’21 looked to transfer to a new college, it didn’t take him long to fall in love with York College of Pennsylvania.

“The Kinsley Engineering Center is every computer guy’s dream,” Louderback says of the specialized facility on campus. “It’s very techy. There are computer parts ready to be put together. I toured other schools, but that trip to York had a lasting impact on me.”

Last year, he earned his bachelor’s degree in Computer Science at York College. He believes that without the College’s help, he wouldn’t have landed his job as a solutions analyst with Deloitte Solutions.

“From the very beginning, York College included a very hands-on education,” Louderback says. “Between requiring internships and many in-school projects, I always felt prepared when I got into my full-time position.”

His role with Deloitte allows him the flexibility to work on projects of his choosing. He’s designing a website for the U.S. Department of Agriculture that will help Internet Service Providers apply for grants to roll out service in rural areas.

While his job is fulfilling, Louderback believes there is more on the table for his career.

“They’re a great place to work for and I love my team,” he says, “but I’ve always felt like I could do more for the tech industry through my own career.”

For Louderback, doing more in the tech industry begins at home. He’s the family tech guru, the person everyone calls with issues about web browsers. He has keenly observed as smart devices such as mattresses and showerheads have become more prevalent.

All along, he’s wondered why there isn't a way to answer people’s questions and tie all their devices together. He even wrote a paper on the subject at York College.

“No one is trying to unify these products together,” he says. “Why not link these devices together and have your mattress tell your showerhead when you’re out of bed?”

To address such issues, Louderback developed Ambient Home. An element would be installed in a wireless router to connect a home’s smart devices. He calls it the “glue that keeps those ecosystems together.”

The biggest problem for Louderback wasn’t the idea for the device or coding it, but how to make Ambient Home into a business.

Louderback received a newsletter this year from York College about the McNees Accelerator program, an eight-week session that utilizes faculty members and community leaders to help entrepreneurs start businesses.

“Without the Accelerator, there’s no way I’d have the paperwork submitted to get my business registered,” he says.

After taking the course, enrollees get a day to pitch their products to a pair of judges, who award   portions of a $5,000 grant to the winners. Louderback and Ambient Home won $4,000 of the total allotment.

“Everyone in the program had a phenomenal idea, but to know they picked me was jaw-dropping,” he says. “Four thousand dollars isn’t that much to a business, but it's enough for me to get a head start on what I want to do.”

Less than a week after receiving the $4,000 prize, Louderback put it to good use, securing the parts necessary to create his prototype.

“When I think back on the whole experience, it’s definitely moving,” he says. “York College has made such a lasting impact on me, and I’m forever grateful.”