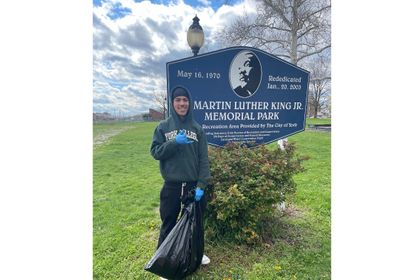 James Goveia ’23 has a long history of Greek life in his family. His father was a member of Alpha Phi Alpha Fraternity, Inc., and James grew up watching behind the scenes, observing the exemplary lives of many legacy members.

When he began attending York College of Pennsylvania as an Engineering major, he soon realized that only one sorority of “The Divine Nine,” historically Black Greek Letter organizations that make up the National PanHellenic Council, was represented on campus. James began exploring how he could change that.

James, originally from Long Island, connected with Rita Trippett, Director of the York College Community Opportunity Scholarship Program (YCCOSP), and Desvan Moody, a 2012 York College graduate who serves as the District II Area Director of the Pennsylvania Association of Alpha Chapters of Alpha Phi Alpha Fraternity, Inc. They encouraged him to reach out to fellow classmates and the Student Senate to gauge interest in such a fraternity.

“The multitude of campuses allows the fraternity to have an extended reach across Central Pennsylvania,” Moody says. “It really helps to rewrite the narrative about Black men and what Black men do as well as develop our brothers into leaders.”

“They share the same goal,” says Trippett. “There are more opportunities for exposure, education, and civic responsibility, and then really re-establishing the Black identity. On these campuses, that’s huge.”

Leaders and a brotherhood

As Alpha Men, the brothers of Alpha Phi Alpha Fraternity, Inc. have been active in community service projects.

“It’s not only what the fraternity does for us but what we’re doing for the organization,” says Jeremiah, a Film and Media Arts major from York. “Knowing that the organization is helping our town, our city―having African Americans involved in the community is important.”

The initiates will volunteer with Alpha Phi Alpha’s national programs, including A Voteless People is a Hopeless People; Go-to-High-School, Go-to-College; My Brother’s Keeper; and Project Alpha. Through these initiatives, the Alpha Men will spread the word about voting, education, quality of life, and teen pregnancy.

They’ve also been involved in clothing drives, trash pickups, and other activities across their campuses and in their communities.

The brothers appreciate the historical and social aspects of the fraternity.

“It’s been beneficial to be able to connect with people who are like-minded and can help us out,” says Kellen, a Business Administration major.

For Jalen, also a Business Administration major who will become president of the fraternity next year, the greatest reward has been stepping into the role of a campus leader.

A rich history and a hopeful future

Alpha Phi Alpha Fraternity, Inc. was founded on December 4, 1906, on the campus of Cornell University, and was the first intercollegiate Greek-letter organization for Black men.

For Jeremiah, being involved in an organization of such historical significance, whose members included the Rev. Dr. Martin Luther King Jr., abolitionist Frederick Douglass, and Supreme Court Justice Thurgood Marshall, is motivating.

“It feels like you’re doing something greater than yourself,” Jeremiah says. “It’s not about you. It’s about what you can do for your community.”

Moody would love to see the fraternity expand from five active members on three campuses to at least five members on each campus.

“This is a movement. This is a powerful new space that we’re walking into,” he says. “To see how expansive the community has become, I know we’re moving in the right direction of creating a space that is equitable for all students, a space where all are seen and can find a community.”