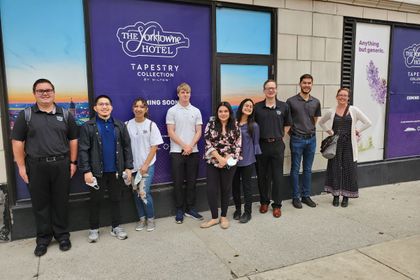 Dr. Fred Becker, chair of York College’s Department of Hospitality, and Dr. Dominic DelliCarpini, Dean of the Center for Community Engagement, worked with YCEA staff to organize the training program. “We have been meeting since last spring on the project,” said Becker. “In addition to getting the program planned, we made recommendations for trainers. The management and staff from The Yorktowne will take a major role in filling many of the presenter positions.”

A goal of the program, according to Becker, is to attract new individuals to the industry. “Most hospitality employers are in need of staff,” he said. “When the Yorktowne opens up, they are going to need 50 to 60 staff members, increasing pressure on the existing labor markets. The YCEA wanted to do its part to increase the potential staff to help the industry as we move into the fall.”

Students in Becker’s Yorktowne Hotel Project-based Learning course last fall took on the task of helping the YCEA define its needs as well as proposing a list of initiatives to address those needs. “In this project-based learning course, students had to develop a statement of the project, based upon the needs of the sponsor, and had to clarify that with the sponsor before they started their project,” he said.

Here’s what they came up with for a statement: “There is a need for trained employees for the growing hospitality market in the York City area. The need also exists for the harder to reach individuals that don’t have social media, individuals where a language barrier may occur, and those that may rely on public transit.”

They then proposed the following project: “Promote hospitality jobs by assisting the YCEA in fulfilling hospitality jobs within the City of York, through career development actions like training and job fairs. This will be achieved by promoting and reaching people within the local community that need local and sustainable jobs, yet may be reached in creative ways.”

The students input and recommendations were reflected in the resulting training program, which is free and requires no previous experience. Classes in the program – named in honor of one of The Yorktowne Hotel’s most recognized and tenured employees ­– are being taught by industry professionals at Crispus Attucks’ computer lab in the evenings and on weekends, with classes available in Spanish upon request. Attendance at the classes and a passing grade on the corresponding exam will result in a certificate from the nationally recognized American Hotel and Lodging Educational Institute. Following the end of the training program, participants are encouraged to attend the two job fairs in September where staff from The Yorktowne Hotel will be meeting with candidates.