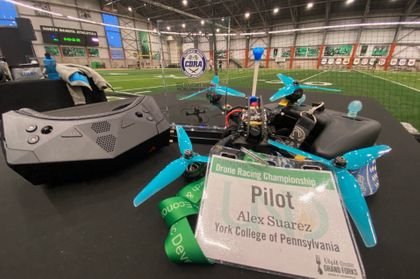 “It felt really cool representing York, all these big schools and here I am racing at the same level,” said Suarez. “For all other sports our schools would never compete. Drone racing is still new enough in which schools are not picking pilots, pilots are picking the school.”

The race was scored on an individual level and a school/team level. The minimum number of pilots per team is two, according to Suarez. “However, as an individual, I got York into 8th out of 11 teams. There were only two individual teams – York and Purdue. If York were to get more drone racing pilots, we would be even more competitive on the team level.”

Ever since his first Blue Angels airshow, Suarez has been hooked on aviation. He began with flying model planes in 2012, then moved on to quadcopters because “I could keep it in the air and control it much better than a model plane.” Quadcopters are drones that fly using four rotors.

Suarez flew quadcopters ­– he even did a science fair project with them – and later learned to build them. In 2016, he discovered there were races for quadcopters, so he did some research and built his first race quad a year later.

Suarez’s hobby has gained him notoriety, but it has also put into practice the engineering skills he has learned at York College. One of the main and most important components of a racing drone is the frame, according to Suarez. “I raced with a custom frame, which was designed with SolidWorks (3D CAD software) skills I learned from York,” he said. “I was also able to design it with a better understanding of how the forces from crashes would interact with the frame and how durable it would be. Some of the components on the frame are new and never seen before in drone racing. I remember showing my frame to some of the other competitors, and some of them were doubtful of the changes I made, but at the end several of them asked me when I’m going to start selling it after they saw how it held up in the race.”