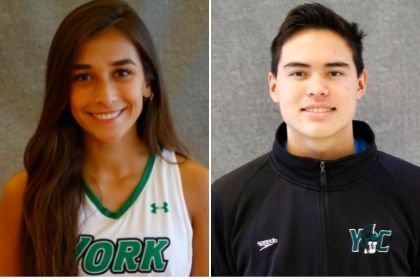 Collin Draminski ‘24, a Nursing major, and Sara Pique ‘24, a Civil Engineering student, balance the importance of being a student and an athlete.

As he competed in a three-day swim meet, Collin Draminski ’24 grew worried. His fears weren't based in the pool but in the classroom.

Collin, a sophomore Nursing major at York College of Pennsylvania, had a microbiology test coming up on Monday. With traveling and swimming over a long weekend, he thought he didn’t stand a chance of passing.

He combed through PowerPoint slides between races and before bed to prepare for the test.

Collin passed that test and went on to maintain a GPA over 3.0 the rest of the semester. His resolve proved that time management is as vital to a student-athlete as any competitive trait.

“I was so tired,” Collin says, “but it didn’t matter if I wanted to sleep or not. I had to get it done.”

During the field hockey season, sophomore Sara Pique ‘24 is on the turf 20 to 25 hours per week. To maximize her free time, the Civil Engineering major plans her schedule each day.

“I know I’m my most productive after dinner, from 6 to 10 p.m.,” Sara says. “I learned that when I try to work earlier, I have a hard time focusing. I learned to use that time for other things, like going to the store or doing a workout.”

Sara often checks the online Canvas platform, designed to enhance learning, to remind herself of assignments and due dates. Her key to success is finding time for herself. It’s okay to have an hour to lie in bed and watch a show, she says.

“If I'm tired and know I need to be awake and focused, I'll take a power nap,” Sara says. “Having an hour break to restart makes you more productive.”

Sara has proven her philosophy with results. She earned a 3.9 cumulative GPA and scored a spot on the Academic All-MAC team for field hockey.

“I came into college not knowing what I could achieve,” she says. “I set up my academic goals and pushed to accomplish them.”

Collin thrives during swim season. The busy schedule creates natural windows for schoolwork. But when the off-season arrives, it’s harder to stay disciplined.

“I’m so busy in-season that now I feel like I have all the time in the world, so it gives me more time to slack off,” he says.

Collin sought help from York College’s Student Counseling Services. His grades weren’t slipping, but he wanted to review his time management before classes got out of hand.

“A lot of what I wanted was accountability,” he says. “We talked about discipline, and my counselor put a lot of things into perspective. I might not have the motivation to study, but I had to push through it.”

It's not all about large tasks. The athletes say small adjustments can do the most to help with mastering time management.

Collin uses Quizlet to create flashcards. The learning app allows him to quiz himself during meals or when he’s on the go around campus.

Sara took a summer class in 2021 to lighten her load heading into the fall field hockey season.

Collin spends a few minutes at the beginning of each week writing his agenda. It contains important dates, assignments, and other tasks he must complete.

Most importantly, both athletes believe that confidence in yourself goes a long way.

“I doubted myself coming into college, both in the classroom and on the field,” Sara says. “I kept thinking of the worst outcome. Once I got started, had a goal and a plan, I realized I could do this, and I haven’t had any regrets.”