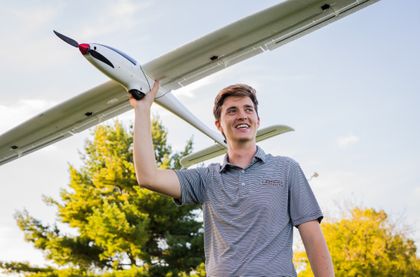 A quiet pursuit that is sure to make big waves is what John Kershner ’20 has been involved in during labs and field work since graduating from York College of Pennsylvania two years ago.

Kershner, 24, a Mechanical Engineering graduate, has his eyes and ears on the skies, working with teams researching aeroacoustics to find solutions to noise pollution. He’s been busy as a doctoral candidate at Lehigh University applying innovative design approaches for aircraft.

Kershner’s quest to create safer sound environments has earned him a spot in a Fulbright Study and Research program under Thomas F. Geyer, a Doctor of Engineering at Brandenburg Technical University (BTU) in Cottbus, Germany.

Winging it: what this research will deliver

Kershner’s Fulbright program will run September through March. He will work as a research assistant to Dr. Geyer at BTU and DLR, the German counterpart of NASA. Kershner will test theoretical practices of aircraft design to reduce noise.

“Planes are super loud. Obviously, engines are loud, but some studies have found that the noise of air passing over the wings—the ‘whooshing’ on the approach to landing—can be similar magnitude as the engines,” Kershner says.

There’s also evidence that the noise level leads to an increased risk of stress-related diseases, such as heart disease, he says.

Aeroacoustics engineers study the three main characteristics that are thought to help certain owls fly and apply them to aircraft design, according to Kershner. They are leading-edge serrations, the comb-like structure on the front of owls’ wings; the special soft surface of their feathers; and trailing-edge porosity, which refers to the porous feathers at the back of the wings.

Trailing-edge porosity is the focus of Kershner and his colleagues as they seek an understanding of how porosity on a wing might make an airplane quieter and if its impact could lead to better health for residents near airports, travelers, and air-traffic controllers.

“What we’re doing at Lehigh is experimental and hasn’t been applied yet to things that actually fly,” Kershner says. “A lot of the work that’s been done on this is just simplifying the model and testing it on a flat plane that has holes in it.”

Kershner has tested porous wings on a two-meter remote-controlled airplane equipped with a microphone to monitor sound levels. He notes that porous wings can cause a loss of aerodynamic performance and that he’s not aware of such a test on a passenger plane. That would happen when more work has been done to study the safety of changing the wings of planes that fly people.

York connections at home and abroad

Kershner’s love for German culture has deepened since his first exchange program in Germany during high school. But he cites his engineering studies and York College experience as catalysts in his decision to focus on research through initiatives such as the Graham Collaborative Innovation Fellows (formerly  the Graham Innovation Scholars), spearheaded by Dr. Dominic DelliCarpini, Dean of the College’s Center for Community Engagement and Interim Executive Director of the Graham Center for Collaborative Innovation.

“I was able to do an internship in Germany my junior year of college that was supported through the Graham Scholars,” Kershner says. “The connections at York and that experience are what helped me get this interest. It was another way that I could practice my German skills and learn about German culture.”

He says his passion and decision to pursue a doctorate developed “between my co-op, and then in that internship, where I learned about research, and the Graham Scholars helping me get to Germany.”

“[Dr.] Dominic [DelliCarpini] mentored me, and we had a lot of classes and went to conferences; a big part of that was doing stuff in the York community as well,” he says.

“He was ready for leadership and started right away in the summer of 2020 to get going with us,” Jaworski says. “He’s been working with me on aerodynamic noise generation. He’s been trying to take some of the ideas we’ve developed from a theoretical basis at Lehigh to make it happen on practical devices. I’ve been impressed by the way he led a team of undergraduate students last summer.”

Kershner started directing a smaller group of undergraduates, some of whom continued working with him on a glider project, which applies the trailing-edge porosity experiments. The group won first prize at Lehigh’s STEM-SI research competition among more than 80 submissions in 2021.

“Naturally, he’s a leader in that sense. He has a way that people want to work with him. He leads by example,” Jaworski says. “That’s great for me as an advisor, to work with someone who wants to get the work done.”