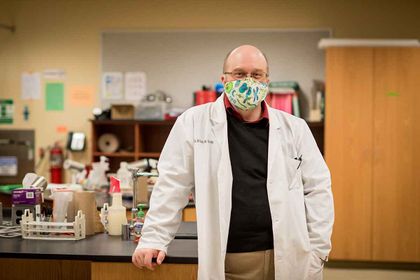 It was more than a year ago that Brian Gray read his first article about COVID-19 and thought, “This is going to be big.” Trained in immunology and microbiology, the Assistant Professor of Biology at York College of Pennsylvania has been keeping a close eye on the release of the approved Pfizer and Moderna vaccines. While there’s a slew of speculations about reactions to the vaccines and concern about how they were developed, Gray says those fears can be put to rest.

“As a parent and as a partner to somebody who is immune-compromised, I’ve been paying attention to guidelines, development in the disease, and what we’re looking for in the future,” he says. “I can honestly say I’m very hopeful for what these vaccines will mean for us.”

How do these vaccines work?

Both the Pfizer and Moderna vaccines use mRNA technology, or messenger RNA. A lot of people confuse that with DNA, Gray says, and are afraid it alters their genetic makeup. The best way to think of the vaccine is a recipe that is shared with cells so they can make proteins that trigger an immune response, building immunity for COVID-19.

Unlike other vaccines that use a weakened virus or components of a disease, these vaccines don’t contain any form of COVID-19. Early-stage clinical trials using mRNA vaccines have been seen with influenza, Zika, and rabies.

What about people who report symptoms or other adverse reactions to the vaccine?

Allergic reactions to vaccines are rare, but can happen with many medical treatments, Gray affirms, and people who have allergic reactions to other vaccines should talk to their doctor. As for people developing a low-grade fever, a headache and other flu-like symptoms, primarily after the second vaccine, that shows signs of a healthy immune system, Gray says.

“It’s the body building up the immune system, getting ready to fight, and then saying, ‘There’s no illness here, it’s okay,’” Gray states. “It’s a perfectly normal response.”

How can we be sure these vaccines are safe?

Some people believe that because these vaccines were developed so rapidly that scientists can’t possibly know all the negative impacts or reactions people may have to the vaccine. However, Gray says the technology used to develop these new RNA vaccines has been in aggressive development for a decade.

“This wasn’t just slapped together with the hope to make a profit,” he says. In fact, the molecular biology technology has come so far that scientists at Oxford University in the United Kingdom took just three days to swap out the information in the vaccine because it had already been developed against  different viruses.

When can we get back to normal?

If grandma gets the vaccine, she should be able to see her grandkids, right? “It doesn’t work quite like that,” Gray says.

The ability of the immune system to handle never-before-seen infections drops off with age, according to Gray. It’s a totally natural process that’s been seen with the shingles and meningitis vaccines, too.

Assuming a grandparent gets both shots, about a month later, they should be fine as long as they don’t have heavy exposure.

Walking past someone without a mask who has the virus at the grocery store should not be a worry. However, having several grandchildren over for the weekend is considered high exposure, and older adults have a greater chance of getting sick in those situations.

Getting back to not wearing masks and having normal social gatherings will take some time. It could require 85 to 90% of the population to be vaccinated, although more data and time will show if that changes as more people receive the vaccine.

“There's a misconception that once someone is protected through vaccination, they're basically covered in an invisible magic shield against which those particular infectious microbes ricochet off, never to harm that person again,” Gray says. “But, the immune system, like all biological systems, takes time to get fired up.”

Someone who is vaccinated should be protected against the development of serious disease, but can still get infected, even for only a few days, and then they could still pass that on to others, he adds. Especially in light of new, more infectious COVID-19 variants, it becomes even more important to wear a mask and continue social distancing. “We need to wait long enough for the coronavirus to run out of people to infect, even briefly, to guarantee success.”

No matter how healthy you feel, ultimately, you’re getting vaccinated for other people, Gray says. “It’s a good deed to shield people who can’t get the vaccine, and we’re doing this so we all can get back to doing the things we miss with the people we love.”