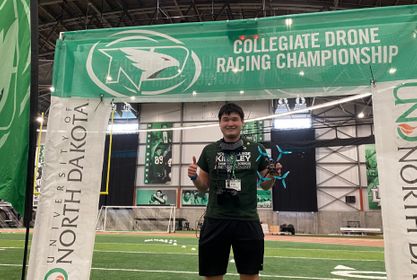 Alex Suarez ’24 took third place in the 2022 Collegiate Drone Racing Championship. His engineering coursework is helping him to create, innovate, and race at a higher level.

It started with Nerf guns. Alex Suarez ’24 was in elementary school in Frederick, Maryland, when he began disassembling his toys and tinkering to make them better.

“I may not have always been able to put them back together,” he says, “but I could sure take them apart.”

Now a sophomore Electrical and Mechanical Engineering student at York College of Pennsylvania, he’s gotten the hang of reassembling the pieces and is focused on improving more complicated machinery: drones.

A globally ranked athlete, Alex recently placed third in the 2022 Collegiate Drone Racing Championship (CDRC) at the University of North Dakota in Grand Forks, North Dakota, piloting a custom frame he designed. The skills he’s learning in his York College classes are helping him understand the theories and mechanics of how drones work and improve his ability to create, innovate, and race at a higher level.

Becoming one with the drone

Putting on drone goggles is like stepping into the cockpit of a plane. You see exactly what the drone’s camera sees and nothing else.

“When you’re flying it you feel connected, one with the aircraft,” Alex says. At competitions, pilots turn their heads and duck as they maneuver through the course—and flinch when they crash.

Drones can go from zero to 100 mph in less than a second. Alex was pulling upwards of nine Gs (gravitational force) in his last race.

“The performance of these aircraft is crazy,” he says. “You can do so much with them and have so much control.” But when drones are flipping, turning, and nose-diving on a dime on the 3-D racetrack, even the best pilots can lose control, leading to some pretty epic crashes.

Races were halted more than a few times during the CDRC so pilots could extract crashed aircraft from the netting that separates athletes and spectators from the course. For Alex, the threat of a crash is worth the risk for the thrill of the race.

“It’s an adrenaline rush,” he says. “It gets you moving, gets your blood flowing.”

Alex has been racing and building drones for about five years. He has figured out the basics.

“But I didn’t fully understand how it all worked,” he says. Through his York College classes he says he’s been able to make the connections between the how and the why.

“Understanding the actual theory behind why everything is doing what it’s doing and putting that side together has been very insightful,” he says.

“It's always great to see students with a passion, especially when it can be related to their studies,” says Dr. Scott R. Hamilton, York College Professor of Civil Engineering. “It certainly adds a richness to their experience and it is exciting to see how they make connections from class to things they are doing, but may not have understood, about their outside interests and hobbies.”

Alex plans to continue racing drones, working to improve his standing and drone design. But his dreams are bigger than just racing. He wants to invent drone-related products to improve the industry.

“It’s so new that no one has explored all the possibilities to make it better,” he says. He’s in the process of obtaining a patent for one of his inventions.

Alex is learning more every day in his classes, and he plans to use that knowledge to design more complicated machines such as an electronic speed controller and flight controller. In the end, he’s still a tinkerer, disassembling his toys and trying to make them even better.