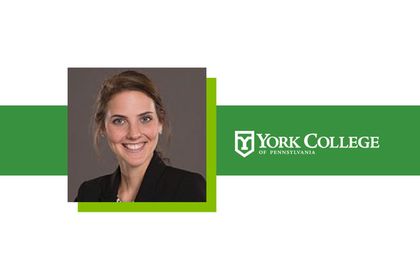 Megan Jones knew she liked math and numbers as she entered her freshman year at York College of Pennsylvania. But, she also knew she didn’t have an interest in becoming a teacher, and after one class that first semester, she decided that accounting was too, well, accounting-like.

But numbers wouldn’t always be so cumbersome to Megan, as she can tout today that methods she learned at the Graham School of Business helped her uncover ways to save one company $400,000 annually. But her journey from freshman to successful business woman wasn’t clear at first.

“I went to York College undeclared,” she says, “and gave myself a year to figure it out. During that first year, on the tennis court, I bumped into the head of the Supply Chain Management department.”

The two began talking about what path Megan was interested in pursuing. He suggested she give Supply Chain Management a try. She did – and really liked what she found.

“Supply Chain Management is a lot of math,” Megan says, “but, it’s also processes. Basically, it’s all about making a company run more efficiently, which I think is interesting.”

While the field includes things like logistics, distribution, operations, and procurement, Megan says they all revolve around the same principle.

“The goal of any company is to become a LEAN organization,” Megan says. “Every industry needs good supply chain management; from fashion to food. So, it looked like a good degree to have.”

Learning on the job

In her junior year, Megan started an internship with Textron in Maryland.

“I learned a lot from that experience,” she says. “So, as graduation approached, I applied for a full-time position in Textron’s management training program.”

In September 2015, her senior year, Megan was accepted, which meant that she had a job waiting for her upon graduation in 2016.

“It’s a two-year rotational program,” she says. “They place you in a variety of their companies, and you perform a different function at each location.”

“I’ve been with companies in Indiana, Kansas, Georgia, and South Carolina,” Megan says. “So, I also get to see different places; it’s fun.”

“I was working on process improvement,” Megan says, “and I’ll be honest, my first try failed.”

Every two weeks, an outside company would come in to restock cabinets with supplies. There was no method of control—cabinets weren’t locked; employees could freely take what they felt they needed, like gloves.

“That year, the company had spent about a million dollars just on gloves,” Megan says.

So, she obtained data from the outside company and went to work.

“My mistake was that I just jumped in,” she says. “I spent about three weeks doing a lot of analytics work, without understanding what was happening. It was not going well.”

Megan said she worked with her boss to determine what wasn’t working.

“Then, I went back, mapped it out, and reinstated the plan,” she says. “I looked at the data, and if we hadn’t used a particular item for over six months, I had it removed from the restock list.”

Her training led her through the full roster of items, reconsidering restock quantities, and putting some control on access to the cabinets.

“It seems simple, but when you step back and look at it, you see things differently,” she says. “They might be restocking us with 15 items every two weeks when we only need six every two weeks. That adds up.”

A month later, costs were down, and the savings continued from there.

Megan continues to incorporate what the Graham School of Business exposed her to: the LEAN concept of making processes more efficient.

“The things I learned at York College were really helpful in what I’m doing now,” Megan says.

“If the tech time on a production line is 32 minutes and you want to knock it down to 25,” she says, “maybe instead of workers sharing tools between stations, each station has its own tools. That’s the kind of evaluation that saves time and increases productivity.”

Megan is currently at TRU Simulation & Training near Charleston, South Carolina – and has already agreed to accept a full-time position there when she completes the program in July.

“Don’t be afraid to fail; failure is how you grow,” she says. “And always have a good attitude – that’ll get you through anything.”