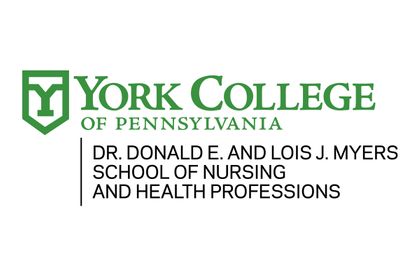 Retired physician Dr. Donald E. Myers of Red Lion made a $5-million gift to York College of Pennsylvania in memory of his late wife to name the Dr. Donald E. and Lois J. Myers School of Nursing and Health Professions.

“The gift from the Myers family will provide a transformational opportunity for the School of Nursing and Health Professions to develop much-needed new programs in the health sciences, such as Occupational Therapy,” said Provost Laura Niesen de Abruña. “We have been planning to add this program and others for several years but did not have the right funding until the Myers family stepped in with their extremely generous gift. I look forward to expanding the programs offered by the School, just as we had envisioned in our strategic plan.”

A 1951 graduate of York Junior College (YJC), the predecessor of York College of Pennsylvania, Myers said the gift allowed him to recognize the College’s role as a stepping stone to his 40-plus-year career as a physician in York and also to honor his wife’s memory.

The recipient of a Rotary Club of York scholarship, Myers graduated with an associate degree in chemistry and went on to earn a bachelor’s degree from Franklin and Marshall College. He then served two years of active duty during the Korean War in the Army Medical Corps. Myers completed medical school at Philadelphia College of Osteopathic Medicine in 1960.

“At that time, it was very difficult to get into medical school, perhaps because schools were flooded with applications from veterans returning from service,” he said. “F&M and Michigan State were the two schools in the nation, interestingly enough, that were highly ranked. With a good scholastic record from them, you were very likely to get into medical school. Fortunately, good grades and all classes from YJC transferred to F&M.”

Myers returned to York to complete an internship and residency at Memorial Hospital after graduating from medical school. After several years working in the Memorial Medical Center, he bought his own office on East Market Street, where he practiced until his retirement.

Lois Myers was an elementary school teacher, having earned a bachelor’s degree from Concordia University in Nebraska. She taught at St. John Elementary School in York for three years, and then taught at Gloria Dei School in Ambler, Pa., for four years while her husband attended medical school in Philadelphia. When Donald and she returned to York, she taught at Lincoln Elementary School. She received a master’s in education from Millersville University in 1983 and a Reading Specialist Certificate, and served as a reading specialist at the Dallastown Middle School until her retirement. She also wrote two screenplays that were featured on the national television show “The Rifleman.”

Lois passed away in 2017. She and Donald have two daughters: Christine, who lives in Vermont, and Melisa, who lives in York County.

“We are so grateful to Dr. Myers for his extraordinary gift naming the Dr. Donald E. and Lois J. Myers School of Nursing and Health Professions,” said York College President Pamela Gunter-Smith. “The resources provided will secure York College's position as a major producer of healthcare professionals for our region. A truly remarkable gift, it is the spark that will launch new programs, particularly in allied health fields.”

“I wanted to make a gift to York College now, as I’ve witnessed its admirable growth,” Myers said. “I was presented with a number of options, but it seemed appropriate that my gift support the School of Nursing because of my background in health sciences.”

“I also wanted my wife, Lois, to be remembered in some way or other,” he said. “I wanted her name to appear somewhere other than on her tombstone.”

This gift is part of York College’s comprehensive campaign, EVOLVE: The Campaign for York College, which launched publicly on Oct. 1. EVOLVE began in the summer of 2017 with the creation of the Strategic Plan for a Greater York College. Since then, thousands of donors have supported seven areas of focus: Academic Excellence and Innovation, Spartan Athletics, the York College Fund, Scholarships, York Country Day School, the Center for Collaborative Innovation (including the new Knowledge Park, Engaged Scholars Program, and the Center for Academic Innovation), and Spartan Commons, the new center of campus and gateway to learning. The goal for EVOLVE: The Campaign for York College is to raise $55 million toward these objectives. To learn more, visit evolve.ycp.edu.