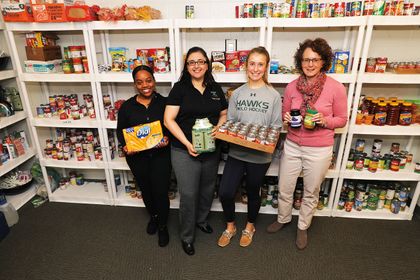 Finals, papers, dating, homesickness. These are things college students expect to worry about.

But not having enough to eat?

Dr. McAdams, Associate Professor of History and York College of Pennsylvania’s Director of General Education, learned of food insecurity being a problem on campus. A food pantry to serve students was established in 2016.

“I had studied why we have food insecurity in the U.S. and wanted to take a look at the issue here,” she says.

It’s why she chose this topic for her first-year seminar class, part of York College’s project-based learning initiative, in 2017.

“In the classroom, you can teach students about food insecurity,” she says, “but here they see it in the real world.”

“Students that year worked on getting a constant food supply, the embarrassment of being food insecure, getting feedback on student food needs, and letting students know the pantry exists,” Dr. McAdams says.

In 2017, most students didn’t know the pantry was there. Its name, the York Cares Food Pantry, led many to believe it served York City, not York College.

The name changed to Spartan Food Pantry. Highlighting its college tie, the pantry joined the York County Food Bank to garner a more constant supply, especially in summer. Students collected food at the end of the semester, which could be used over break and summer, Dr. McAdams says.

Classes build on prior years

This is why Dr. McAdams supports York College’s project-based learning.

“It’s an authentic project. I can say, ‘Here’s what last year’s group did. Build on that work,’” she says. “Students have to call campus offices, be professional in meetings with officials, helping develop these skills. Students learn to address an issue, and how to respond when someone says no.”

The pantry accepted several 2017 class recommendations. More students knew about the service, more food was collected, and more students are being served, leading to new issues for the next year’s class.

“Distributions have gone from once to twice a month, requiring more staff,” Dr. McAdams says. “Students can submit online request for certain food, rather than just being handed a bag which led to waste if they didn’t know how to use it or didn’t like some of it.”

Dr. McAdams breaks her 2018 class of 25 into four groups to address issues raised by implementing the 2017 recommendations.

“Several nursing and biology students took on getting more nutritious donations, not just mac and cheese,” she says. “Another group made cards with simple recipes to cook these foods, such as making a nutritious meal from black beans and rice.”

Athletes in the class tried to address the stigma of using the pantry.

“We looked at West Campus, where many upperclassmen live, and you can opt out of campus meal plans,” she says. Class members learned apartment roommates often go together to supply food, and when one student can’t do his part, he turns to the pantry.

“We considered the West Campus Community Center, but it didn’t have areas big enough and had too many windows, so people couldn’t come without being seen,” Lizzy says, referring again to the stigma issue.

After meeting with Director of Residence Life Robbie Bacon, Lizzy’s group made a recommendation.

“The college is considering building a student union on West Campus, where there could be room for a larger, discreet pantry,” she says. “We recommended putting the food pantry in the new student union when it’s built.”

Dr. McAdams will push her 2019 class to focus on the stigma issue, but she sees real progress on the food pantry, and in her students’ development.

“This gives students perspective. It takes more than one person – and a long time – to solve a professional, or societal, problem,” she says. “As an employer, this is the person I want to hire.”

Lizzy, a Biology major and aspiring surgeon, says this project may not help her directly in the operating room, but it will make her a better person.

“This class helped me be more aware of what’s going on around me,” she says. “This is my community, my home, and I want to help any way I can.”