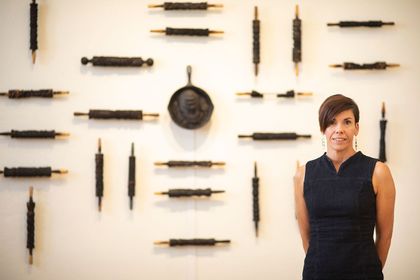 Even superheroes need an advocate. They need someone to fight for them, to help get them resources and support, and to make sure they have a seat at the table where community decisions are being made.

Kelley Gibson is that advocate in York. And the people she calls superheroes are artists. “They make something out of nothing,” she says. “It didn’t exist before they created it, and they’re the only ones who could make it.”

To her, that’s a superpower, and as the President of the Cultural Alliance of York County, she champions for the artists and art organizations that call York home. Now, she’s being recognized for her work supporting others as a Year of 50 Spartans Award recipient from her alma mater, York College of Pennsylvania.

Falling in love with York

Kelley got her first taste of the York art scene in the mid 90s and instantly fell in love with the City when she tagged along on a college visit with a friend. “As soon as I walked on the campus of York College it was like, yup, this is where I can be me,” she says. “This is where I’m supposed to be.” She ended up enrolling at the College, studied English, and later graduated in 1996.

During her free time, she went to poetry readings, gallery shows, and immersed herself in the music scene. Instead of being treated like an outsider, she was welcomed with open arms into the arts community. “They’re so collaborative and welcoming,” she says. Feeling welcome to get involved is what sent Kelley over the edge from just living in York to calling York her home.

Kelley’s first real experience with the Cultural Alliance of York County was on the receiving end of its grant program when she was working in marketing for YorkArts (now Creative York). “I saw firsthand how the operating funds from the Cultural Alliance sustained our organization, especially during tough times,” she says.

Now, she oversees those grants and the fundraising the Cultural Alliance does to be able to fund them. And then, there’s the advocacy. “I’m representing our artists and arts organizations and the things they do every day to make York the place where we want to live, work, and play,” she says.

Her experience as a patron and supporter of the arts led her to realize just how important those artists and organizations are. It’s what has made her such a strong voice in advocating for them. “I could see the impact,” she says. “It’s more than just beautification.”

Having a thriving arts community benefits everyone. “For $1 invested in arts and culture, $9 is invested back into the community,” she says.

The power of a thriving arts community

In order for those artists to be able to do the work they do and to call York home, they have to be supported and be involved in community conversations. Just like the community supports a new business, working artists need support too, she says.

Kelley will continue to be the advocate for her superheroes. She’s seen the impact artists and arts organizations have had on the revitalization of York. She understands the power of a thriving arts community. And she’ll do everything she can to continue to fight for the community that welcomed her into their fold – and turned York from the place she lived into the place she calls home.