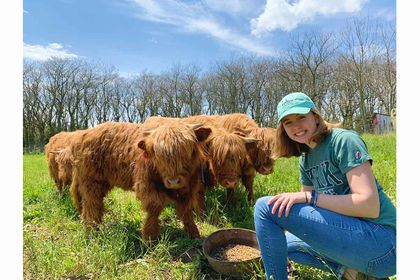 Abby Wurzbach ’23 remembers first stepping into the Championship Community Center in Salem Square and being in awe of what opportunities were offered to city students. As a Graham Scholar, Abby knew she would be drawn back to this place when she went from attending York Catholic High School to becoming a full-time Secondary Education Mathematics major at York College of Pennsylvania.

The community center, tucked away in the small neighborhood about five minutes from the College campus, features a gym, arcade games, tutors, and community members who are excited to invest in the lives of area students. “I was so passionate about children, youth, and education that it was great to find people here who felt the same way,” Abby says.

Upon acceptance to York College, Abby learned she would soon have an opportunity to leave her own mark on the Championship Community Center. As a member of IMPACT York, one of the several student volunteer programs under the Changemakers umbrella at York College, Abby met several other students during orientation who also wanted to make a big impact in the York community.

The team gets to work

The team of students, required to volunteer 20 hours a year and plan a community project, pitched the idea of an open house to the directors at Championship Community Center, and they were met with a resounding “yes.” The big event, scheduled for April 24, was canceled when it became obvious the coronavirus outbreak would change plans for the rest of the academic year.

“It was pretty disappointing to learn we wouldn’t be able to complete that goal by the Spring Semester,” Abby says. While the students decided to postpone the event, Cody Miller, Director of Service Initiatives at the College’s Center for Community Engagement, says he was excited about the initiatives students took to not miss an opportunity to think outside the box.

“A lot of our Changemaker groups were volunteering onsite with smaller nonprofits who had to close their doors or transition to a skeleton crew,” Cody says. “Each group of students really had to get creative in how they could still make valuable contributions.” For one group, who started working with Re-Source York, their broad onsite work morphed into contributing in a virtual way by doing website and social media work. Abby’s group decided they would make a series of videos that would be posted to their IMPACT York Facebook page and then used to further engage the community.

In just three days, the Facebook page reported about 4,000 organic impressions from the students sharing a video tour of Abby’s family farm in Brogue, PA. Students also plan to launch instructional videos on how to draw or do simple engineering/tinkering projects, as well as livestream story times for young students who are home from school.

“I know for me, it was initially really upsetting that we had this event planned and couldn’t see it through,” Abby says. “Things change and stuff comes up, and I think our team knew we still had to do something to help the kids in this community and help Championship. And I know coming back in the fall that we’ll be able to pick things up where we left them and still see a positive impact.”

As Cody continues to guide York College Changemakers in adapting their plans, he’s excited to see how this experience has pushed many people to find ways to transition and be innovative. From pivoting in these projects to adjusting classes and schedules, he’s seen students become more adaptable and problem-solve in new ways. “I was deeply impressed with the creativity and teamwork that students have shown through this,” he says. “This experience has built a skill set of collaboration and leadership.”