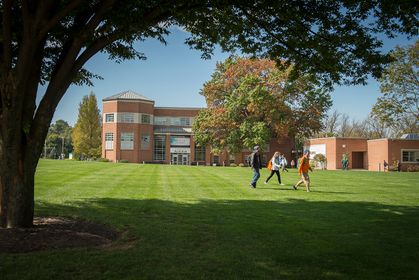 Dr. John M. Weaver has a robust resume that helps him bring a wealth of national security expertise to his students at York College of Pennsylvania.

The assistant professor of Intelligence Analysis retired from the Army as a lieutenant colonel after 20 years of service and worked as a civilian in the intelligence community for five years. He has presented papers focusing on cyber security, written books on international intelligence issues, and has a background in supporting special operations.

Now, he returns to fall classes with ideas for bolstering the Intelligence Analysis program after a two-week visit to the Norwegian Defence University College, where he collaborated with other experts and educators on defense and intelligence issues.

The NDUC, which focuses primarily on national security studies, is considered the premier institution for military research and higher education in Norway.

“It focuses on mid- and senior-level national security instruction for predominantly military officers,” Dr. Weaver explains. He completed a Fulbright Specialist Program while there as part of an international scholars exchange through the U.S. State Department. U.S. Air Force and Marine personnel were among the visiting students during his stay.

The NDUC extended an invitation for Dr. Weaver to interact with its instructors on defense issues and transatlantic and global security matters.

“We basically discussed how we run our college programs,” Dr. Weaver says. “We shared ideas on how we pull strengths from our individual programs to make them even better.”

He witnessed students conducting a NATO exercise and gathered ideas about how he might increase the realism of his class exercises.

He also met with the head of the Norwegian Defence Intelligence School to exchange ideas on courses of study and discuss the most pressing issues that entry-level intelligence analysts, such as Dr. Weaver’s students, might face.

He conferred with experts on Russia and China, as well.

He and Norwegian intelligence and defense experts are collaborating on another book, about transatlantic and global security. Most of them had attended an International Studies Association conference in San Francisco the past spring, where they presented papers that will become part of the book. Among the authors from the United States is Dr. James Norrie, York College dean of the Graham School of Business, who is expected to contribute a chapter.

Dr. Weaver’s NDUC experience will strengthen the syllabus in York College’s Intelligence Analysis program. Some students who have majored or minored in the discipline have been offered jobs or are working at venues such as the Army’s Aberdeen Proving Ground in Maryland.

The aim, Dr. Weaver says, is for his students to secure positions in the federal intelligence community, possibly with the CIA, National Security Agency, the FBI, or the Treasury Department. There also are opportunities with local and state police departments and emergency management agencies, where students have participated in internships.

“We do have people moving in this direction, and they have been successful thus far,” he says.

Dr. Weaver, who came to York College in 2015, co-edits (with Dr. Jennifer Pomeroy) an annual intelligence assessment book written and compiled by students in his National Security class. The publication serves as an updated resource for the U.S. intelligence community and has been praised by the National Geospatial-Intelligence Agency for teaching critical thinking and methodologies.

“Students do something tangible besides getting a grade. They publish an intelligence book,” Dr. Weaver says of the project.

Just as Dr. Weaver returned from Norway with ideas for his classes, NDUC experts seized on the student-written book as a teaching exercise they could employ.

“My Norwegian colleagues were very intrigued with pushing students to that kind of level,” he says, “and they might look at doing that themselves.”