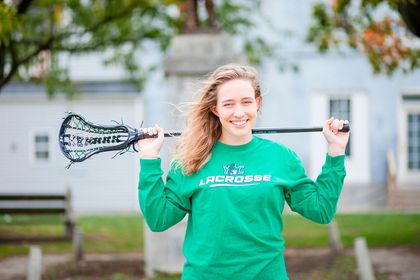 Rachael Huebler has competed in championship lacrosse matches in high school and college, making her just the person to introduce the sport to children in a rebounding York neighborhood. Being a Graham Scholar at York College of Pennsylvania puts Rachael on the path to success in that effort. Developing the Salem Square Lacrosse Program is her signature project as a Scholar.

The sophomore from Pasadena, Maryland, a Biology major with a pre-med track who plans to be a pediatrician, started playing lacrosse around the age of four. “Pretty much when I was born, I had a lacrosse stick in my hand,” Rachael says. Her dad had played when he was younger, and she learned the fundamentals of the sport from a local coach, putting those skills into action at weekend scrimmages.

Rachael played in championship games among Catholic girls’ school teams during all four years of high school, with her team winning a title twice. At York College last season, the Spartans captured the Capital Athletic Conference title and won through two rounds of the NCAA tournament before falling in the regional title match to Tufts University.

Graham Scholars plan their curriculum and adopt an innovative individual project. Rachael picked the neighborhood lacrosse program. The project builds on the revitalization of Salem Square in the western part of York, where a park has been renovated, the Championship Community Center has opened, and a new branch library serves residents. “York has been making leaps and bounds over the last few years, and I’m really excited to be part of it,” Rachael says.

The project was conceived by a senior on last year’s lacrosse team. When she graduated, Rachael stepped in, selecting teammates with leadership skills and other students at the College to conduct clinics. “My role is to connect York College with Salem Square,” she explains. “I’m working with Sport Management majors in running the lacrosse clinic. They are designing the curriculum to teach skills of lacrosse and character.”

Registration has opened for the initial clinic for coaches and players in November at the center. Rachael hopes to sign up 80 students from kindergarten through eighth grade. Based on the reaction to a demonstration that she and her teammates provided, there could be a good turnout. “Last semester, we went to a basketball game at the center. We brought lacrosse sticks out at halftime and played with the kids,” she says. “They seemed to have a blast. We had to herd them off the court so the game could start again.”

The city middle schools don’t field lacrosse teams, and the high school has only a girls’ squad. Rachael believes the program could encourage a community league and perhaps teams at schools. “Lacrosse, speaking from my own experience, taught me so much about accountability and setting goals,” she says. “Introducing it into an area that hasn’t seen it before can introduce new skills.” One clinic will be held each semester, with the frequency increasing based on interest in the program.

Rachael is a recipient of another academic honor. She was selected as a University Innovation Fellow through Stanford University, where she will apply her fellowship training and her design-thinking skills as a Graham Scholar to enhance collaboration between faculty and staff at York College. She says she feels fortunate to be at York College, and she credits a coach who recommended the College as she searched for a school where she could play lacrosse. “I went with my mom, and once I stepped on campus, I wanted to go there,” she says. “It’s never stagnant. It’s always moving. I am so thrilled to be here.”

The lacrosse clinics won’t be Rachael’s only assistance to Salem Square. When she studies in Italy during her junior year, she will visit small towns and bring their ideas on neighborhood development back to the community.

Rachael is meeting with first-year Graham Scholars to ensure that ties between the College and Salem Square remain strong after she graduates. “This is only the first step,” she notes. “My goal is to have a partnership with the community center.”

Rachael believes the lacrosse program will make a difference in the lives of city kids. “I love lacrosse. I say that from the bottom of my heart,” she says. “When I walk off the field, I’m always one thousand times happier. I want to pass on that feeling to other people so they can experience the amazing sense of joy that comes by doing something you love.”