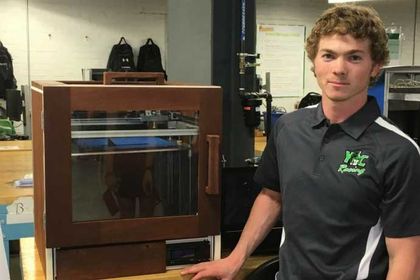 The team overcame time and budget constraints to design and built a three-dimensional printer before graduation.

Raise your hand if you know how three-dimensional printing works.

A group of Engineering students from York College of Pennsylvania recently did – from scratch.

Michael Bulla and Ryan Carter were part of the team that built a machine that can take a digital design and print it layer-by-layer into a physical object up to 12 cubic feet. It was a dream project, they say, even in its painstaking stages.

“The idea to build one wasn’t initially part of the independent study,” Michael says. “We were more focused on the materials aspect and what’s going to happen if we do this. One of the professors suggested we build our own.”

The group went forward with the idea, but instead of taking an existing design, they started from Step 1.

As if building a 3D printer from design to completion wasn’t challenging enough, time and budget constraints made the project even more difficult.

The group started the process in late January, with a target completion prior to their May graduation ceremony.

“Four months sounds like a good amount of time. But, when you have something so technical, it’s really not,” Michael says. “Sometimes, we would be sitting there banging our heads against the wall trying to make something and get it to cooperate with the other parts.”

The group’s original budget totaled $800 – a sum they shared with another student project.

Fortunately, York College Engineering professor Dr. S. Drew Wilkerson gave the team some starting parts. The group was also able to apply for a grant and came in at a final budget of $1,200.

“I enjoyed going from the CAD design to the finished product,” he says. “Having the idea, what we had brought to life was pretty awesome to see.”

Still, there was some trepidation. After months of design, building, and countless hours spent on the project, there was a moment of truth. Would this 3D printer work?

“I didn’t have super high hopes the first time,” Michael admits. “There’s a lot of trial and error involved. Being a prototype, no one in the school has done this before; we didn’t know what we were making with the deadlines we had.”

Their first successful print came the week before graduation.

“We made it. We have a functional printer,” Michael remembers thinking.

“I was pleasantly surprised with the first one,” he says. “It probably took three times to print something properly, which was honestly very good.”

For both Michael and Ryan, the rewards of the project extend beyond graduating this year.

Ryan is taking the experience to graduate school at the University of Maryland, Baltimore County, where he plans to focus on materials research, an interest of his since high school.

“I’ve done materials research in my co-op and the independent study helped me,” he says.

Michael has a job lined up when he finishes his professional semester, with a local company that specializes in fire suppression systems. He says the engineering facet of working with a 3D printer has a direct correlation to his next endeavor.

For now, he’s able to reflect on a project he had no idea he would ever do when he arrived on the York College campus as a freshman several years ago.