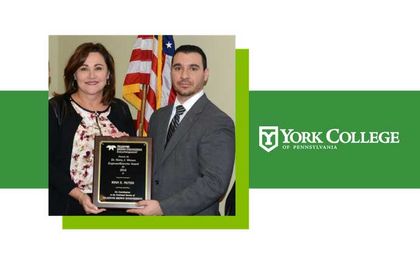 Ryan Muzii (’14) said he wrote the letter because he ‘felt the urge to give credit where credit is due.’

During the long nights cramming at the Kinsley Engineering Center, a lot of things rushed through Ryan Muzii’s head. Maybe he’d think about a thermodynamics exam he’d have the next day; perhaps he’d ponder what his future beyond York College of Pennsylvania might entail.

One thing he never imagined, though, was one day working on the other side of the world – specifically at the Bagram Airfield, the largest U.S. military base in Afghanistan.

“The idea of supporting our military overseas was never on my radar,” Ryan said recently, recalling that his priority while studying Mechanical Engineering at York College was simply hoping to get through the semester and move on to his next co-op.

Yet Afghanistan is exactly where the 26-year-old York College graduate turned government contractor has found himself since November.

A letter of thanks

Ryan’s honored to do the work and believes he has a core group of people to thank for getting him there: the Engineering professors at York College.

He recently wrote to them to do just that:

“I am proud to serve my country, and the men and women who day in and day out fight for our freedoms. But most of all honored to use the skills, disciplines and principles bestowed onto me through you in helping them.”

Ryan’s rationale for the letter is simple.

“I truly believe that I would not be prepared for this transition in my career if it were not for my professors at YCP,” Ryan said. “I felt the urge to give credit where credit is due.”

The time spent under the tutelage of York College’s faculty has paid off.

After graduating in 2014, he landed a job from his York College co-op, working as a contractor at Teledyne Brown Engineering’s Prototype Integration Facility for the U.S. Army. Just two years later, TBE awarded Ryan the Dr. Harry J. Watson Engineer of the Year Award.

“It was a great honor and I am still a little astonished about the whole ordeal,” Ryan wrote to his professors.

Not long after that, he was deployed overseas. He uses everything from 3-D printers to laser scanners to welding tools to make equipment. Then, Ryan shows soldiers how to use it. He talks about his job with a sense of amazement and had an “a-ha” moment came when a soldier thanked him for the devices he built.

“I was just in awe because someone I admired greatly thanked me! I was just doing my job and trying to provide the best product possible to them,” Ryan said. “I take pride in my work with the U.S. Army and the payoff for me is serving my country through the means of protecting our soldiers while they conduct their missions.”

‘Forever thankful for the sacrifices’

Ryan’s job is demanding. He works in an austere environment where reality demands timely solutions.

But his time at York College prepared him for the pressure. It offered an accredited engineering program plus individualized attention from professors.

“I didn’t want to be a number, but a person with a face, a name,” he said. “I wanted to have more than just a student-teacher relationship. I wanted to be mentored.”

That’s exactly what he found at York College. Professors would pop into the Kinsley Engineering Center and help with tricky homework assignments. They stayed beyond office hours. That built a sense of camaraderie between the students and the professors, Ryan said, and made him feel as if he was never alone as he pursued a demanding degree.

That quality education prepared him to do quality work. And he wants his professors to know they played a central role.

His note from Afghanistan to his professors ended like this:

“So I thank you from the bottom of my heart, for kicking my butt into gear, and for never letting up! I hope this poorly written email will help add to the fire, or drive for the reasons why you became a professor. I truly will never forget where I came from and I will always give credit where credit is due, and that is to you. Thank you. Forever thankful for the sacrifices I will never know you gave for me.”