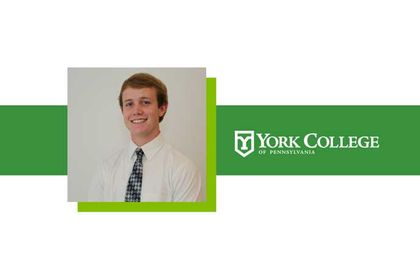 In his sophomore year at York College of Pennsylvania, Justin Brown set his sights on working at T. Rowe Price.

Two days after graduating, he walked into their offices for his first day on the job as an investment liaison specialist.

When he first arrived on campus, Justin wasn’t sure what he wanted to do with his life. But York College had strong programs in all of his potential majors, so it felt like a good fit for him.

He dabbled in different classes until he found his passion: business.

“One of the things that York College was really helpful with was just kind of encouraging and pushing me to figure out what I wanted to do,” he says.

He decided to pursue a degree in Business Administration, then narrowed his focus further to where he felt his future might lie, in Finance.

Other people might not see it, Justin says, but in finance you can help people. He liked the idea of making a difference in people’s lives.

“By helping someone invest in a good product you can set them up for a good retirement,” Justin says.

He was also excited by the challenge of the field.

“I like that there’s a lot to learn,” he says. “It’s constantly evolving and changing.”

In his sophomore year, Justin went over his career options with his advisor. He set his sights on working at T. Rowe Price when he graduated. Together, they began to lay the groundwork to make that happen.

The summer before his junior year, Justin had his first internship with the company in portfolio accounting.

He’d applied for numerous internships with T. Rowe Price. He knew he didn’t need to land his dream job yet, he just needed to get his foot in the door.

One internship led to another the following summer, and then additional work experience in the spring of his senior year. He used the connections he’d made to move within the company, finally landing where he wanted to be.

His advisor and the staff in the Career Development Center at York College supported him the whole time — answering questions and helping him through the process.

“They helped me develop the tools I’d need to pursue what I was looking for,” Justin says.

When he got the job offer to work at T. Rowe Price after graduation, it was like a weight was lifted off Justin. All his work and planning had paid off.

Prepared to enter the workforce

There’s a lot of new things for Justin to learn at his job. Even now, almost a year after graduating, he’s still learning. But he wouldn’t have it any other way.

“I like something where I’m constantly being pushed more and more,” he says.

He’s in a supporting role, working with everyone from portfolio managers to analysts, making sure everything runs smoothly.

He credits York College for setting him up to succeed.

From the NASDAQ Trading Lab to experience in programs like Bloomberg, Morningstar and Microsoft Excel, Justin says he had a leg up at T. Rowe Price because of his class work at York College.

“I definitely think that York taught me a lot to be successful,” he says, “and I’m able to continue to grow while working here.”

Once Justin found his passion, he pursued his dream with unwavering drive. And at every turn, his professors, advisor and staff at York College and the Graham School of Business were there to support him.

“They provided me all the resources they could to get me to where I wanted to be,” he says.

Now that he’s working with the company he strived for years to be a part of, Justin isn’t letting up on achieving his goals. He only sees more room to continue to grow and work his way closer and closer to the top.