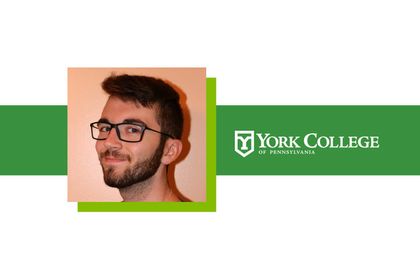 As his graduation from Ridley High School in Delaware County approached, Frankie Supplee-McNichol got letters from a lot of colleges.

That included York College of Pennsylvania. Frankie thought he’d check it out because it wasn’t too far away from the Philadelphia area but not so close that he’d feel like he was still at home.

He thought the tuition was fair and had ample financial aid.

It wasn’t until after he got to York College that Frankie realized there were so many more reasons he’d made the right choice.

‘You get what you need’

The classes were small, almost always 25 or fewer students. None of those huge impersonal lecture halls students face at some big schools.

With such small classes, the professors got to know him. They knew their stuff and really took an interest in him.

“The professors at York College make sure you get what you need, both in class and out,” Frankie says. “And the professors here have relevant experience to what they teach, and they’re willing to share their expertise.”

On top of this, York College’s ever evolving academic program provided a new degree just when Frankie needed it — a Bachelor of Business Administration in Human Resource Management.

Interested in business, Frankie enrolled in the Graham School of Business. The new BBA in Human Resource Management is giving him exactly the background he’s looking for as he prepares to pursue a career in HR.

“I’m minoring in Psychology, which I view as how people work and get along in the workplace,” Frankie says. “Psychology helps me understand how people are motivated. That’s what HR is.”

The BBA in Human Resource Management has room for a minor already built in. So, it’s another perfect York College fit.

One of his York College classes led Frankie to his first internship, at the York County Food Bank. He needed to do volunteer work for a leadership class and connected with the food bank.

This turned out to be another perfect fit — for both Frankie and the food bank.

“They don’t have a full-time HR person, so I was able to help their executive director catch up on some HR projects. I re-did some job descriptions, updated other job descriptions, and wrote an active shooter policy,” Frankie says. “Exactly what I’ll be doing as an HR professional.”

Through another class project, Frankie met someone at Family First Health. He’ll be starting his second internship there soon.

Frankie says his professors are not only top notch in the classroom but have gone out of their way to help him find his internships, to get ready for the world of work.

“The professors here use their connections to help students get internships and to look for jobs,” Frankie says. “Because they have that relevant experience, they know people who can open doors.”

He cites Dr. Mary Meisenhelter, a Professor of Management in the Graham School of Business.

“She’s my adviser and I’ve had her for several classes. She’s always accessible to answer any questions I have,” Frankie says.

“I can always go to him for advice, and he’s using his connections to help with another possible internship with a former employer.”

Frankie’s on track to graduate in the spring of 2019. But, before he leaves campus, he’s giving back.

He’s spoken to incoming York College students at two “majors fairs” hosted by the Graham School of Business, where new students learn about what the various majors have to offer.

“HR is not a major most high school students know much about, so it’s not a popular major for new students,” Frankie says. “I took the opportunity to talk up the major, but I also let the students know how professors will use their connections to help you with internships and to look for jobs.”

Frankie is busy, but don’t think it’s all work and no play.

“There are many different clubs and interest groups on campus, so there are always activities going on, and something to do every weekend,” he says.

Just one more reason York College is the perfect fit for him.