York College students get ‘inside look’ during visit to NATO headquarters 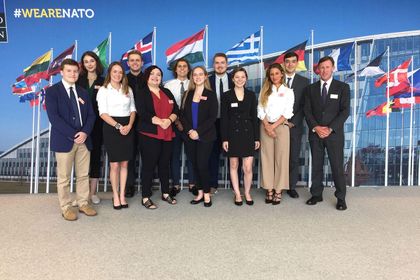 Josie Gardner ’20 couldn’t believe the access her group had as they were escorted down hallways where special badges were required. Military leaders from North American and European countries passed them by as they headed off toward important meetings. No photos, Josie’s group was told.

The visit to NATO headquarters in Belgium was part of a 10-day summer trip taken by York College of Pennsylvania students that included stops in the Netherlands, Germany, and Luxembourg. Organized by John Weaver, PhD, the group consisted of International Relations and Intelligence Analysis majors.

“We were given an inside look and met people who handle operations in places like Kosovo and Iraq,” Josie says. “We got to hear about the hands-on experience of people who do what we want to do.”

The trip helped students see many facets of the International Relations and Intelligence fields up close, she says, especially things like understanding different cultures and biases. “We got to see how the professionals handle these things – the politics, culture, religion – which can all play a role.”

In addition to the academic parts of this work, Josie says the trip gave students a comfort level with the practical aspects of this career. “This was an eye-opening trip,” she says. “It reaffirmed my love for traveling. Being inside intel means a lot of travel — flying, reacclimating to new weather, culture, language, and so forth on short notice.”

Speaking with top level people in NATO about their work confirmed the value of what Josie is learning in her York College classrooms.

“An advanced class I have now, with Dr. Weaver, is preparing me to write government reports,” she notes. “You can’t write these the same way you would for a history class, that won’t cut it.”

The federal government and intelligence industry, she says, demand a different writing structure. “There is a way to write, words to use and avoid. These classes are key for this type of writing for the work I want to do.”

Speakers from the intelligence field that York College has brought in have confirmed this, and it was all brought together with the trip last summer.

“This practical experience is extremely important. These are people I may work with and for someday,” Josie says. “Understanding your career field is tough, especially in a field that can go in any of several directions any day. Meeting people in the field is key.”

Speakers in this area have also told students the field is growing, and the Intelligence Analysis major is not offered at many places. Reactions from higher level intelligence workers, Josie believes, show the program is going in the right direction. “York College is ahead of the curve on this.”