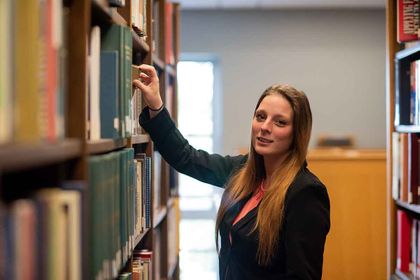 Emily Kurtz ’22 thought she might someday be a veterinarian. But, after an internship in high school, she realized that wasn’t for her. Wondering where her future might lead, she took a step back and looked at the things that interested her.

The list included being president of the Model United Nations and the Robotics Club, a member of Envirothon, and a chairholder in the National Honors Society. The thing that tied them all together was their connections to political science or social activism, Kurtz says. That’s when she decided she’d like to serve her country by working for the federal government.

Growing up in York, she explored opportunities at York College of Pennsylvania and was intrigued by the Intelligence Analysis major. “A lot of other schools offer a basic political science major or general criminal justice programs,” she says. “York College had a better niche program and faculty with a lot of experience in the field. That won me over.”

Up for the challenge

Today, Kurtz double majors in Intelligence Analysis and Criminal Justice while minoring in Cybersecurity. Her classload keeps her busy, but she knows that finding opportunities at the federal level can be competitive. So, she challenged herself and pursued language classes that would help her stand out.

She already had taken two years of Spanish in high school and felt comfortable speaking it at a basic level. She didn’t believe that was enough to help her beat out the competition, so she decided to add Mandarin Chinese to her skill set. After completing two years of the language at York College, she tries to keep her skills fresh by watching YouTube language videos that have captions in Chinese characters, helping her to learn both the spoken and written versions of Mandarin.

“I’ve really enjoyed learning the language, and I know I have to keep up with it or I’ll lose that skill,” she says. “But I don’t want to stop there. I hope to maybe someday learn Japanese or Arabic, because those are other languages that can be really beneficial in the career I hope to pursue.”

One of the things that set York College apart from other schools for Kurtz was the experience of its faculty members. Professors John Weaver and Charles Kauffman have both worked in positions that Kurtz dreams of someday being in herself. They often guide her on classes or other resources she should explore to advance in the program and set herself up for success. “I can call on 10 or more professors who have career experience in this area,” she says. “I didn’t see that in any other school I looked at.”

When she isn’t diving into her coursework, Kurtz still tries to prioritize her community work and volunteers with Spartan Service Alliance. She hopes that future employers see her accomplishments, but also recognize her passions and ability to pursue both with grace.

“I’m making sure I represent the best work I possibly can, to prove to a future employer that even with tough times, I will push through,” she says. “This is the quality of work an employer can expect to get from me. That’s really important.”