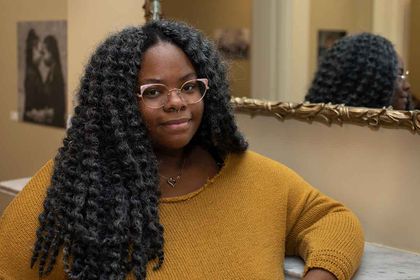 Growing up in Milwaukee, Cherish Christopher ’21 remembers none of her teachers looking like her, a person of color. They hadn’t experienced homelessness like her or felt pitied like her. So, her young brain drew the only logical conclusion: teaching was a white person’s job.

As she got older, though, she challenged that assumption, along with many others. She organized and protested injustice in her community. She later decided to pursue a career in teaching—to show future students that teachers could look like them.

Today, she’s at York College of Pennsylvania in her senior year studying Middle Level Education, Social Studies. And, she’s doing her part to affect change in the community in a different way, as one of the inaugural class of Community Impact Scholars.

The Public Affairs Scholars is programs are grounded in policy research to create sustainable, feasible change in the community. The program brings together faculty and students to tackle data and research projects that can impact York in real, meaningful ways.

The Public Affairs Scholars program comes out of the YCP Center for Community Engagement, expanding on the practical and community-based work already coming from the Glatfelter Institute. “There are a lot of projects and needs within our community in the greater York region,” Cannizzaro says.

While Christopher is no stranger to pushing for change, the data-driven approach as a scholar is new for her. It’s also exciting. “The data collection part is more geared toward affecting change on a higher level,” she says. “We can do a lot as far as serving communities that otherwise wouldn’t be paid attention to.”

Like the project they’re working on now. It’s a collective impact evaluation with Family First Health to understand the impact of organizational effort in the Hannah Penn neighborhood. They’re using survey research, focus groups, and interviews to evaluate the resources available and how they impact the neighborhood.

The work they do will expose Christopher and her fellow scholars to different levels of government affairs and political officials. It also brings together people from varying departments within the College, providing new perspectives. “We’re hoping to create a community of like-minded students who really want to work toward these ideas of socio-economic mobility and systemic change,” Cannizzaro says.

The Glatfelter Institute’s mission is to improve socio-economic mobility in the area. The Community Impact programs increase their capacity to see that through. “We can have a much broader and bigger impact than we were able to have before,” Cannizzaro says.

The impact on the scholars themselves is great, too. “It is a very high-level scholars’ program,” he says. “They’re able to deep dive into these issues and get a hands-on approach to the policy process and research methods.”

Cannizzaro sees it as a steppingstone for whatever comes next for them, giving them a leg up on graduate school or pursuing a doctorate. It’s solidified Christopher’s decision to go to graduate school, shifting her to think more policy-minded when it comes to education reform and impact.

She’s already surpassed every goal she’s set for herself: the first person in her family to graduate high school and go to college. “To know that the work that I’m doing could potentially help someone who grew up like me is just unimaginable,” she says. “It just makes me so happy.”